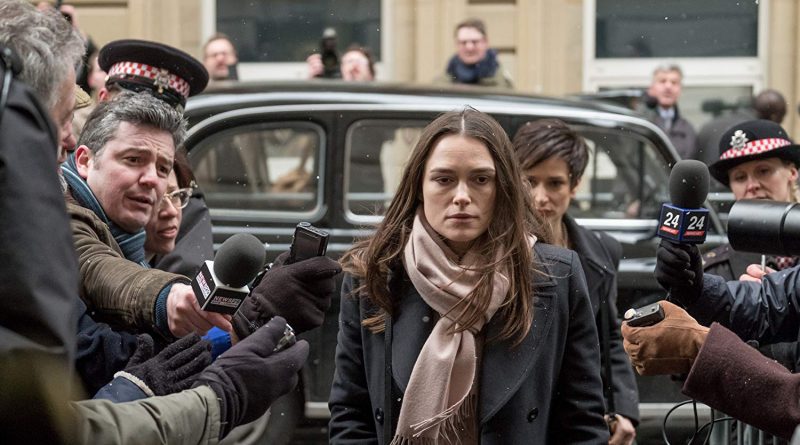 In 2003, while the American media batted around the possibility of weapons of mass destruction in Iraq, and some outlets even helped to advance the Bush administration’s march to war, Britain faced its own press-related crisis that didn’t receive much coverage outside the United Kingdom.

Katharine Gun, a translator for Britain’s Government Communications Headquarters, was charged with violating the nation’s Official Secrets Act of 1989 for leaking classified information to the press. Her “crime”: blowing the whistle on an illegal request by the U.S. National Security Agency to spy on the United Nations’ offices of Angola, Bulgaria, Cameroon, Chile, Guinea and Pakistan. These six nations were considered swing votes on the U.N. Security Council and thus could determine whether the U.N. would approve the invasion of Iraq, as requested by the United States and supported by the United Kingdom.

Directed by Gavin Hood, Official Secrets aims to bring this somewhat overlooked chapter of history to life. As Gun, Keira Knightley extends her recent spate of biopics and docudramas: the Enigma Code thriller The Imitation Game (2014); the adventure Everest (2015), about mountaineer Robert Edwin Hall; Colette (2018), about the early years of the French novelist, and the World War II romantic drama The Aftermath (2019). Even with spirited performances by Knightley and Ralph Fiennes as her lawyer, however, the film struggles to find the requisite mix of outrage and suspense. Like many a movie based on a true story, this re-creation seems like an anti-climax.

Part of the problem is the script, which Hood co-wrote with Gregory and Sara Bernstein, based on the book The Spy Who Tried to Stop a War: Katharine Gun and the Secret Plot to Sanction the Iraq Invasion (the title alone conjures up more tension than many scenes in this movie). Despite the inherent drama of Gun’s ordeal, Official Secrets lurches unconvincingly from one revelation to the next. After receiving the NSA email, she prints it out, puts it in a pink (!!) envelope addressed to an activist friend and pops it in the post as Paul Hepker and Mark Kilian’s by-the-numbers score churns melodramatically in the background. Before you can say All the President’s Men, the activist friend has passed along the missive to a reporter for The Observer, who’s soon meeting with shadowy forces in a parking garage.

Meanwhile, the movie skimps on the actual pathos in Gun’s story. She’s married to a Kurdish refugee, who faces deportation back to Turkey as a measure of British government-ordered retaliation, once she confesses to being the source of the press leak. “You’ve never even seen war,” he argues since he doesn’t understand his wife’s determination to upend both of their lives. Yet she blithely moves forward on her mission, seemingly ready to sacrifice her marriage for a greater good.

Hood, a former lawyer, probably viewed this project as a natural fit, given his background. Whatever his motivation, it doesn’t necessarily register on the screen, as Official Secrets turns out to be as dry as his last film, the somewhat similarly themed Eye in the Sky (2015).

Ultimately, this portrait in courage leads up to its inevitable conclusion. Though Gun risked everything to tell the truth, political forces triumphed, Iraq was invaded, and the region remains in chaos almost 20 years later. After her trial, the real-life Gun told the media: “I’m just baffled that in the 21st century we as human beings are still dropping bombs on each other as a means to resolve issues.” (The sincerity of such sentiments cannot be questioned, but their naiveté is another matter.)

At the end, before the final credits roll, Hood inserts news footage of the actual Katharine Gun, blond, slight and nothing at all like the dark-haired Knightley. It makes us wonder: Why should we care about this movie if she couldn’t even be bothered just to put on a wig?