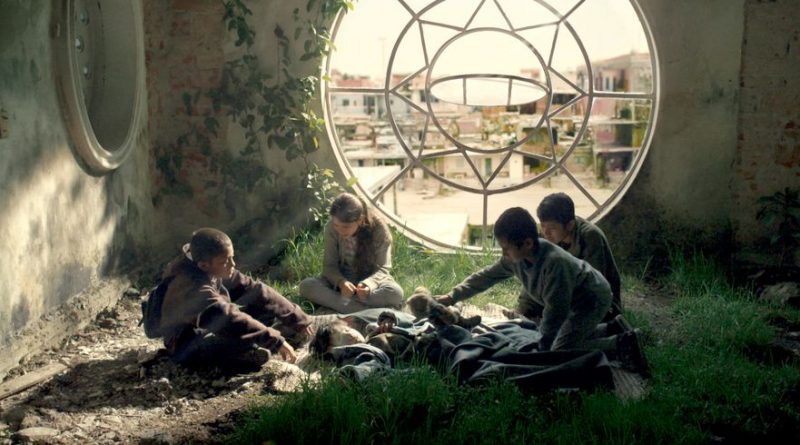 Gritty and raw, Issa Lopez’ dark urban fairy tale Tigers Are Not Afraid (titled Vuelven in Spanish, which translates to They Come Back) centers on the devastating consequences of the drug trade, showing how the cartels’ criminal ways affect everyone in their path — including children, whose innocence disappears as quickly as the grown-ups in their lives. 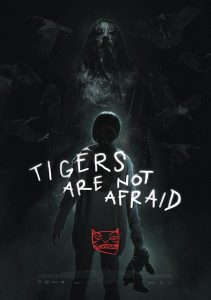 The film is set in an unnamed Mexican border town in which drug-related crime runs rampant. Young Estrella (Paola Lara) comes home after a scary incident at school to find her mother missing at the cartels’ hand. Granted three wishes by her teacher, Estrella uses one to ask for her mother’s return…it works, but in an unexpected way that’s almost as upsetting to Estrella as her mom’s absence. The girl falls in with a group of other orphaned/abandoned kids, who are led by tough-talking Shine (Juan Ramon Lopez). They’re a loyal gang, but their strength is tested when Shine ends up with one of the kingpins’ phone, and the drug lords come after them.

Much of the film feels extremely realistic, and it’s devastating to watch the kids grapple with situations and choices that no child should ever have to make. That realism makes their moments of joy (exploring an abandoned mansion, playing soccer in their new hideout) all the more powerful amid the dark, threatening chaos that looms around every corner. Writer/director Lopez elicits excellent performances from her young cast — they’re vulnerable one moment, hardened the next, and they play both extremes convincingly.

Given its visceral nature, you’d be forgiven for worrying that the film’s fairy tale elements would feel wrong-footed or out of place. But somehow, it all works. Because Lopez is filtering everything through a child’s view of the world, there’s room for fantasy. And, of course, fairy tales have traditionally gone to very dark places. Reminiscent of work by Guillermo del Toro, Tigers Are Not Afraid is moody and moving, harrowing and heartbreaking. — Betsy Bozdech

Leslie Combemale When Tigers Are Not Afraid is not busy scaring you, it’s breaking your heart. Social activism meets horror meets coming-of-age in this bracing, gorgeously shot, intense multiple award-winning film that’s both written and directed by famed and favored Mexican filmmaker Issa Lopez who shows her considerable facility with child actors, including Paola Lara and Juan Ramon Lopez as El Shine, who demand audience attention from the first scene and hold it hostage through the last indelible image onscreen. Though not recommended for those who shun films featuring children in peril, committed viewers will likely place Tigers Are Not Afraid on the list of 2019’s best films. Read full review.

Marina Antunes Issa Lopez’s Tigers Are Not Afraid takes a unique approach to the “cartel” movie, choosing to focus on the young children caught in the middle of the drug wars. An urban fantasy from a child’s perspective, it’s a wholly original piece of work full of wonder, fear and resilience, supported by a collection of outstanding performances from a group of young actors.

Liz Whittemore This film is a gorgeous mix of profound sadness and whimsical imagery. It’s about innocence lost and courage. It will break your heart and hypnotize you with glorious performances by five children. Using dark fairy tale characteristics mixed with brutal violence, Tigers Are Not Afraid is one of the most spectacular films of 2019.

MaryAnn Johanson This is one of the darkest movies I’ve ever seen, a true Grimm’s fairy tale of death, despair, trauma, abandonment, and all with only the tiniest, most desperate sliver of hope to leaven it. It’s a difficult film to watch, and it’s almost impossible to say it’s a movie I enjoyed, but it certainly is an extraordinary work from a filmmaker of original imagination and a rare cinematic freshness to her vision. Brava.

Sheila Roberts Issa Lopez is a masterful storyteller who elicits marvelous performances from her talented young cast. Her love of fantasy and horror is evident in the film’s striking visual design which features many fantastical elements. They include winged insects, slithering snakes, a graffiti image of a tiger that springs to life on a wall, and a supernatural trail of blood that takes on a life of its own as it navigates streets, walls and stairwells to warn Estrella of impending danger as she searches for her missing mother. Read full review.

Pam Grady: Children orphaned by the Mexican drug wars band together, only to find themselves hunted by the same men who killed their parents in writer/director Issa López’s tense, poetic, and distressing fable. The story of young Estrella (Paola Lara) and the four little boys with whom she finds an uneasy community is a fairy tale, of the traditional Grimm variety. “Tigers are not afraid,” is what Shine (Juan Ramón López) the leader of the childish pack believes, but the tigers are also metaphorical and so might be the wishes that Estrella fervently believes are hers and the blood trail that follows in her wake as she searches for her missing mother. What is undoubtedly real is the stolen phone Shine possesses that bad men will do anything to get back and it is in that single-minded pursuit that the true horror of the drama unfolds. With a deft touch and eliciting powerful performances from her young cast, López has made a haunting film that takes an unforgettable look at Mexico’s ongoing tragedy through the eyes of its youngest victims.

Jennifer Merin Tigers Are Not Afraid, written and directed by Mexican filmmaker Issa Lopez, is a gripping and often hard to watch fantasy-clad drama that revolves around a group of Mexican tweens — a girl and four boys — whose ‘disappeared’ parents were victims of the ongoing drug-related violence that is decimating communities across the country. Read full review.

Marilyn Ferdinand: The plight of abandoned and orphaned children has, sadly, been a persistent theme in creative works since at least the time of Dickens. Some of the most moving films centered on “throwaway” children have come from Mexico. Luis Buñuel’s brilliant Los Olvidados (1950) and Guillermo del Toro’s homage to Buñuel’s film, The Devil’s Backbone (2001), are now joined by director/screenwriter Issa López’s Tigers Are Not Afraid. The particulars of each film vary, but poverty is at the root of all of them. López’s film mixes animation with live action in a touching film of camaraderie between a small group of parentless children trying to survive in treacherous circumstances. The young cast give compelling performances, their youthful play mixing with harrowing violence. Tigers Are Not Afraid is the work of a promising talent in Mexican filmmaking.

Loren King Issa Lopez sets her raw and gripping fantastical tale in a Mexican city that’s been ravaged by drug cartels, the population decimated by violence, leaving elderly and children in its wake. The city is like a lawless ghost town in a western, where neglected kids peer from the shadows and play just feet away from a corpse; where shots ring out at random; and where everything is broken, defaced and abandoned. Read full review.

Sandie Angulo Chen: Writer-director Issa López’ Tigers Are Not Afraid is a remarkable if heartbreaking work about the orphans of adults killed (or disappeared) in Mexico’s narco-trafficking war. A genre-bending work that explores trauma, grief, and violence through the lens of tweens forced to grow up far too quickly, López uses magical realism and fairy tale elements to reveal how insidious the drug-related violence is, and how it’s destroying her country’s children. The film is painful and powerful, difficult to watch and impossible to forget. Its young cast is extraordinarily effective and expressive, as they convey the loss of innocence but also the importance of hope and friendship.

Susan Wloszczyna: Tigers Are Not Afraid, infused with a sense magical realism and featuring some rather gripping performances by child actors, is a gritty cinema-verite crime drama that feels like Peter Pan, the Lost Boys and Wendy met in Pan’s Labyrinth while protecting each other on the mean streets of Mexico. As drug wars regularly break out and gunfire is a regular occurrence, young children define themselves as warriors and fend for themselves in a parent-less jungle where crime, corruption and danger lurk around every corner. Read full review.

Nikki Baughan: Allegorical, fantastical and utterly moving, Issa Lopez’s Tigers Are Not Afraid is a masterful meeting of substance and style. This tale of a group of orphan children in Mexico, struggling to survive on the streets after drug gangs kill their parents, combines its hard-hitting themes with dark fairytale elements to powerful effect, aided by a sensitive screenplay and superb performances from the young cast.

Cate Marquis Tigers Are Not Afraid, a mix of magical realism and horror film about children living under the devastating conditions of the Mexican drug wars, starts in a reassuringly normal place, a classroom full of grade school children working on an assignment. That assignment is to create a fairy tale story. One preteen girl writes about a prince who wants to become a tiger, because tigers are never afraid. Read full review.

Title: Tigers Are Not Afraid