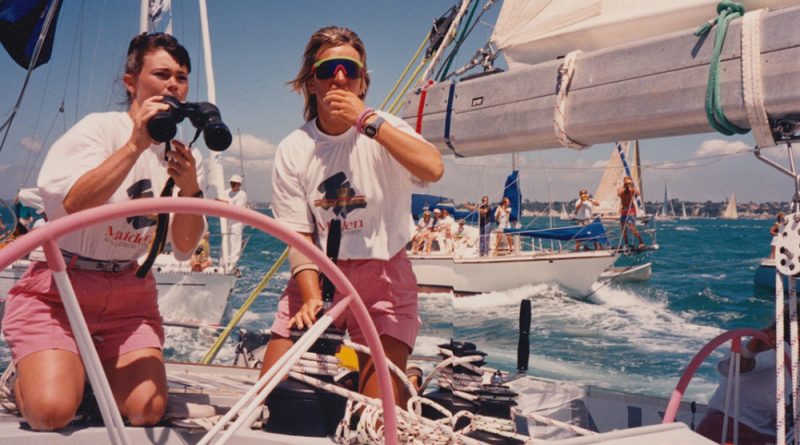 Like a rising tide, thrilling archival footage and still-timely female-empowerment themes lift the compelling documentary “Maiden” beyond the timeworn tropes of the underdog sports drama.

Directed by Alex Holmes (“Stop at Nothing: The Lance Armstrong Story”), the 2018 Toronto Film Festival selection chronicles the tough and trailblazing 1989 voyage of the first all-female team to compete in the Whitbread Round the World Race, a 33,000-mile yachting contest now known as The Ocean Race.

The taxing trek actually started long before the stalwart crew embarked on the grueling nine-month sailing competition. The documentary focuses on the team’s captain and driving force, Tracy Edwards, who rebels after her father’s death and her mother’s remarriage to an abusive alcoholic. After running away from home as a teenager, the Englishwoman wanders to the coast and eventually takes a stewardess job on a charter yacht, which is how she becomes an experienced sailor and learns about the Whitbread Round the World Race.

But when she sets out to join a Whitbread racing crew, none are willing to take on a “girl,” until she finally begs her way into a job as cook and janitor on one of the yachts – and that alone is enough of an oddity in the male-dominated sport to warrant a TV interview.

Realizing that the only way to crack sailing’s glass ceiling is to form an all-woman team, Edwards begins three years before the 1989-90 race putting together an international crew, securing a boat and courting sponsors. The latter proves impossible, as companies refuse to be associated with what they see as a silly novelty at best and a potential tragedy at worst. Finally remortgaging her house to buy a used yacht, which she and her teammates restore themselves and rechristen “Maiden,” and calling in a favor to her unlikely pal King Hussein of Jordan, Edwards and her seasoned sailors are ready to embark when the race begin.

But the sailing world isn’t ready for them. Dubbed “a tinful of tarts” by one sports journalist, Edwards and her cohorts are scorned, patronized and underestimated, with most pontificators predicting that they won’t finish the first of the race’s six legs and that they might even get themselves killed. But the Maiden voyagers not only completed the first phase, they also won the second and third legs – including the dangerous and demanding journey from Uruguay to Australia – positioning themselves as real contenders. But “the further that we got, the nastier” the press would get, Edwards recalled.

Along with the skipper and her crew, Holmes provides interesting new interviews with rival captains and even some of the Maiden-hating journalists, who are sheepish but not exactly apologetic about their coverage. But the soul of “Maiden” is archival footage shot by the women themselves, which puts viewers on the boat and in the middle of the drama. Any question that sailing is a sport goes straight overboard watching the crew muscle the boat into position to “surf” through the Southern Ocean’s looming, frigid waves.

Hitting theaters close on the heels of the U.S. Women’s Soccer Team’s World Cup victory and ongoing fight for equal pay, “Maiden” is a reminder of how far women have come in sports – and how far they still have to go to achieve not just equal pay but equal respect.