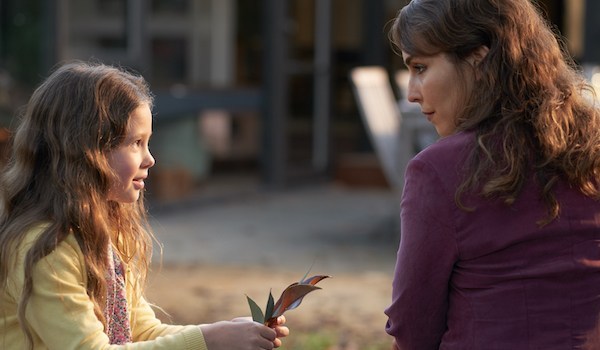 Angel of Mine sets us up to expect a nightmarish conclusion, something that is a cross between Vertigo and Fatal Attraction. Except the object of desire is a child and her obsessed stalker is a grieving mother whose life fell apart after her baby daughter died in a hospital fire seven years ago. That director Kim Farrant and writers Luke Davies (Lion) and David Regal actually deliver a surprise ending that crazily unfolds in a white-bread Melbourne suburb is one of their maternal thriller’s greatest strengths.

The other is the casting of Noomi Rapace as Lizzie, whose infant’s death landed her in a mental hospital, led to a divorce from her fed-up husband (Luke Evans), forces her to take a menial job as a makeup clerk and whose constant teary sorrow is affecting her relationship with her son. But at a child’s birthday party, she spies Lola, a sweet 7-year-old little princess as she twirls about and it dawns on her that perhaps it could be actually her own daughter.

One problem, though. She already has a mother — a smug Amazonian-like blonde of privilege named Claire (Yvonne Strahovski of TV’s The Handmaid’s Tale) whose son is pals with Lizzie’s son. She indulges Lizzie at first, especially since she pretends to be interested in buying her tastefully pale house with its au pair bedroom. But fairly soon her parental radar goes off when her new acquaintance starts popping up with regularity and heads straight to her precious Lola.

Rapace, who knows about being a societal misfit after starring in the Swedish version of The Girl with the Dragon Tattoo, is fully convincing as a tightly wound presence on the verge of spinning out of control. As for Strahovski, she, too, is a bit frightening as she fights to protect her family. Farrant relies a bit too much on her clichéd throbbing cello score to ratchet up the tension. But the payoff is worth it.