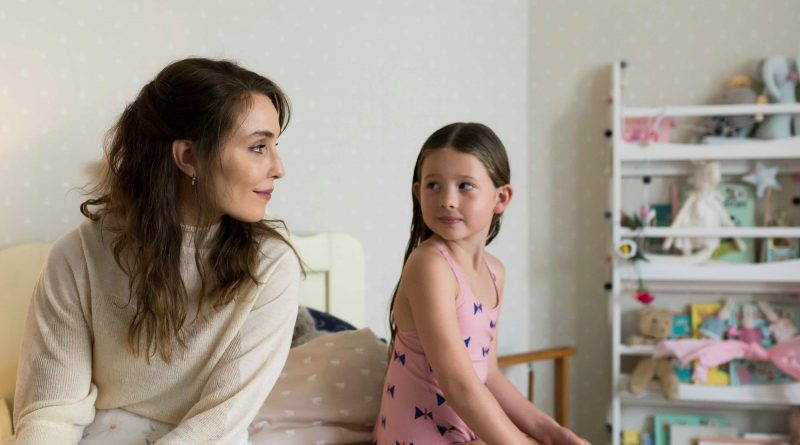 From beginning to end, Angel of Mine is a stunning American-Australian psychological thriller with galvanizing, empathetic performances by Yvonne Strahovski and Noomi Rapace. It’s masterfully directed by Kim Farrant who collaborated with Luke Davies and David Regal on the beautifully crafted script inspired by the 2008 French film L’Empreinte de L’Ange.

There are lots of unusual twists and turns in this suspenseful story as it explores the plight of an emotionally disturbed young divorcee (Rapace) who continues to grieve over the tragic death of her daughter and slowly loses her grip on reality. When she sees the daughter of a neighbor (Strahovski) who strongly resembles her, she becomes convinced her daughter is still alive and begins to stalk her.

Tormented by loss and a dangerous obsession, she drifts painfully through life, finding it difficult to engage in any meaningful relationship, and she becomes a distant mother to her young son. Her ex-husband (Luke Evans) grows increasingly concerned about her ability to cope and be a reliable parent to their other child, a son.

The film is gripping and heartbreaking, and its denouement is unexpected. The impressive supporting cast includes Richard Roxburgh, Finn Little, and Annika Whiteley. The production quality is outstanding, featuring gorgeous cinematography by Andrew Commis, taut editing by Jack Hutchings, and a moving score by Gabe Noel that support the poignant story and elevate the surprise and suspense.

Angel of Mine exemplifies what happens when all the cinematic elements come together perfectly. This film will keep you on the edge of your seat from the moment it starts and will stay with you long after it ends.