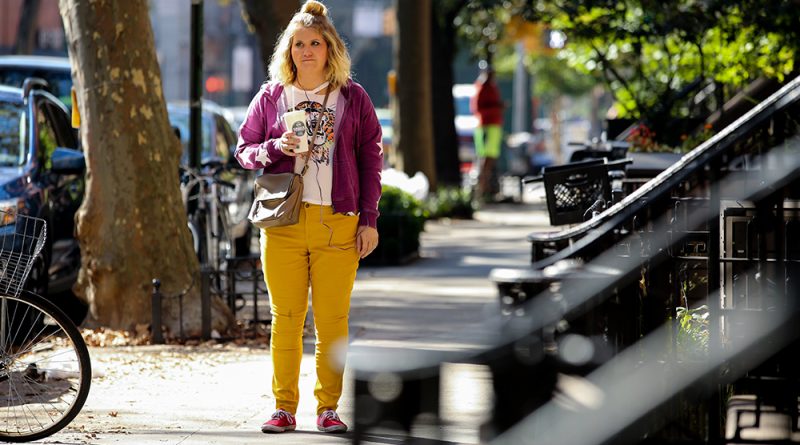 Living on the Upper West Side, tart, self-deprecating, 27 year-old Brittany (Jillian Bell) stands 5’6” tall, weighs 227 pounds, smokes a pack-and-a-half of Marlboro Lights every day, carries six figures worth of student loan debt and is inclined to engage in toxic relationships.

Despite that, she’s always up for a good time. While visiting a new doctor in an attempt to get an Adderall prescription, Brittany is told she needs to lose 45 pounds. “That’s the weight of a Siberian husky!” she replies.

But when her neighbor Catherine (Michaela Watkins) invites her to join a runners’ group, she befriends equally-out-of-shape Seth (Micah Stock), starting with the goal of running a mile. But soon one mile becomes more as Brittany becomes more self-confident.

Eventually, she’s determined to run the grueling 26.2 miles of the New York Marathon – from the Verrazzano-Narrows Bridge to Central Park. Accompanying her physical transformation is an emotional one, as Brittany views healthier relationships, including new room-mate Jern (Utkarsh Ambudkar).

Her commitment and achievement are admirable but, unfortunately, somewhere along the way, Brittany seems to lose her sense of humor. And far too much time is spent during the Marathon, which Colizzo filmed in 2017, working with the New York Road Runners, hosts of the annual event.

But this is a perfect showcase for “SNL’s” Jillian Bell, scene-stealer in “Rough Night,” “Workaholics” & “22 Jump Street” – who lost 40 pounds during filming.

“When I read the script, I laughed and cried,” Bell recalls. “I’m terrified but I don’t want anyone else to play it, because I love her and I know her and I’ve been her.”

Now feeling good about herself, the real Brittany still runs regularly and works for a refugee-resettlement agency.

On the Granger Movie Gauge of 1 to 10, “Brittany Runs a Marathon” is a steadfast 7 – about turning your life around.