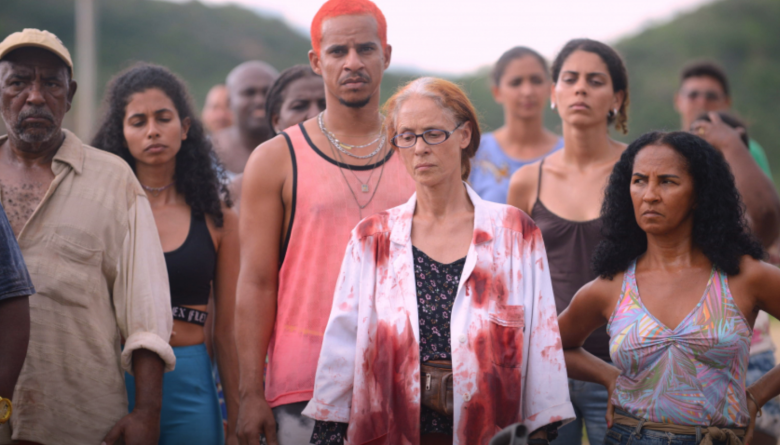 The ‘human hunt’ trope has recently made the news for all the wrong reasons. Recently, Blumhouse Productions pulled their forthcoming film The Hunt after the El Paso and Dayton mass shootings and a subsequent tweet from the President of the United States voicing disgust at the film’s premise.

Yet beginning with Richard Connell’s 1924 short story The Most Dangerous Game and RKO’s 1932 adaptation of the same name, from Battle Royale in Japan, Turkey Shoot in Australia and The 10th Victim in Italy right through to Peter Watkins’ docu-drama Punishment Park and the more recent blockbuster The Hunger Games franchise in the United States, the idea of humans hunting humans has a long, global history on screen.

Enter Brazilian Kleber Mendonça Filho who – with his co-director Juliano Dornelles – reimagines the trope in a South American context rich with colonial critique in the experimental genre film Bacurau. With its recent North American premiere at the Toronto International Film Festival, the film had previously won the Jury Prize at the Cannes Film Festival where (like Mendonça Filho’s 2016 film Aquarius) it also competed for the Palme d’Or.

Taking its title from the small, isolated Brazilian village of the film’s title, Bacurau begins as Teresa (Bárbara Colen) returns home for the funeral of her grandmother Carmelita (Lia de Itamaracá), one of the two all-powerful matriarchs within the community. The other is Domingas – both the local doctor and the local drunk – played with gleeful abandon by cinema icon Sônia Braga, again returning to collaborate with Mendonça Filho after their previous success with Aquarius.

At first seen through Teresa’s eyes, the villagers are full of pride for their home, but they have visible struggles; water is low, there is a pill-popping epidemic, and despite their heavy internet dependency, the entire town appears to have completely disappeared from all satellite maps. With undisguised derision for their local politician whose corruption and willingness to exploit the small town and its inhabitants is clear from the outset, the residents of Bacurau soon discover they have far greater threats to deal with.

These come in the shape of cult film icon Udo Kier’s Michael, who runs a ‘human safari’ tour business that brings blood-thirsting North Americans to South America to let loose with their desire to kill in what what their intrinsic racism allows them to frame as “ethical”. To murder rural, poor Brazilians in their eyes is considered a superior moral act than letting loose at a local shopping mall or elementary school in the United States.

If this sounds shocking, it’s meant to: the critique of contemporary cultural colonialism is hardly subtextual in the film, and Mendonça Filho and Dornelles make no attempt to keep their politics subtle. Cleverly riffing on the codes and conventions of the western – outlaws, bandits and all – Bacurau wears its love for genre films on its sleeve, from spy drones that look like flying saucers from 50s scifi movies to a direct reference to cult filmmaker John Carpenter (a key location in the film’s climax named The João Carpinteiro Municipal School).

Bacurau is a wild, weird ride, and while maybe not for everyone its fearless politics is strengthened by its filmmakers’ determinedly playful approach to genre experimentation. With performers of the calibre of Kier and Braga (who unite briefly in an unforgettable one-on-one encounter set hilariously to 1983 pop ballad “True” by Spandau Ballet), Bacurau proves with spectacular force that the ‘human hunt’ trope is alive and well.