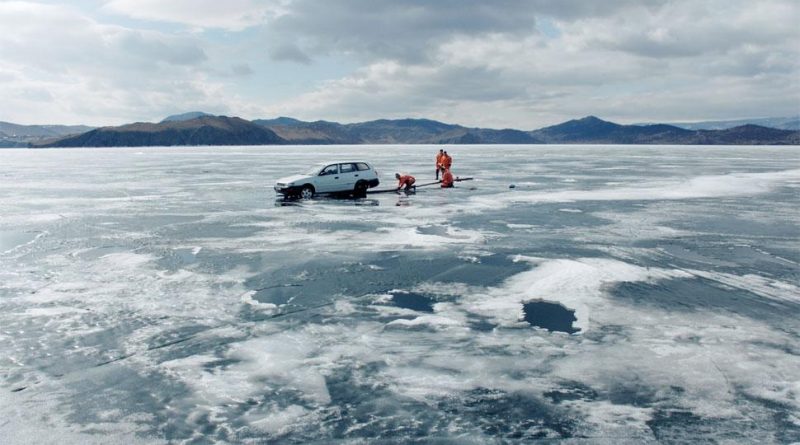 Aquarela poetically pays homage to the majesty and power of water

Without any narration, director Victor Kossakovsky’s documentary Aquarela pays homage to the majesty and power of water, along with the danger and tragedies global warming has caused. Observing but never interpreting, Kossakovsky travels the world: Greenland to Venezuela, Canada to Portugal, Russia to Costa Rica, in his tribute to water through absolutely astonishing images.

Though at times details would help add context, there’s no confusion about the risks the filmmakers undertook or the extraordinary project they embraced. In a lengthy sequence Kossakovsky begins on Lake Baikal, Russia, as several men attempt, with a fragile looking pulley, to wrench an automobile up through the ice. From a distance, we also watch as a car speeds across the lake, breaks through and sinks into treacherous depths. This alone is stunning and signals equally breathtaking moments to follow, all focused on water.

They include a glacier repeatedly calving massive sections, one 400 meters long, generating huge waves, as do icebergs as they flip over. In another shot, a small boat motors among icebergs, providing a humbling indication of scale. The film moves from frozen landscapes to open ocean with equally dazzling cinematography from Kossakovsky and Ben Bernhard. At times, it’s all but impossible to imagine how they managed to photograph swelling, dark waves that move like monsters through the ocean or to capture Venezuela’s Angel Falls in a shot that induces vertigo, our familiar physical orientation cues absent. The Falls’ 1,000 meter drop causes water to dissipate before hitting the rocks below. The New York Times reports that a helicopter dropped Bernhard onto a rock outcropping for that shot; even knowing that, it’s challenging to imagine.

When they appear, people and animals face perilous conditions: a woman steering a sailboat, soldiers walking through flooded streets in Costa Rica, egrets picking their path in a graveyard. Periodically, Apocalyptica’s heavy metal music communicates the mood, sometimes effectively, at other times jarringly. If possible see Aquarela at a projected 96 frames per second (vs. the usual rate of 24) as it was shot. At any speed, for its 89 minutes, I never forgot how vulnerable I and our planet are.