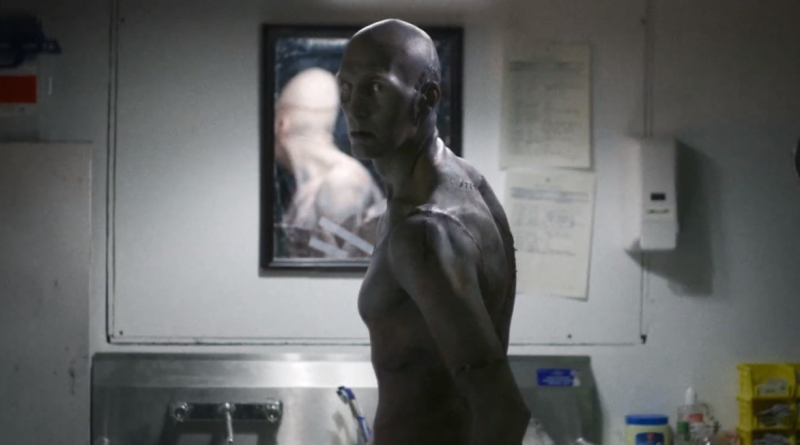 Prolific independent writer/director/producer/editor/ actor Larry Fessenden’s Depraved – his second go at a modern day reworking of the Frankenstein story, following 1991’s No Telling, gets right to its point with admirable directness, opening on a scene of attractive Alex and Liz (Alex Breaux, Ana Kayne), who’ve just moved in together, in bed followed by what’s clearly a familiar argument about where their relationship is going…the (barely sub-) text being children.

A former combat medic with issues (Liz’s observation that Alex “brought the war [and all its trauma] home” is right on the money), he’s not ready for a lot of things and makes a hasty exit, ostensibly to visit his granny. But along the way he’s attacked by a stranger, stabbed viciously and left to die on the pavement.

Except that he doesn’t: He wakes up in a hospital bed, pale body crisscrossed with sutured wounds, head shaved, right eye milky and memory a thing of patches. His new mentor is Henry (David Call), the doctor who patched him up and is dedicated to rehabilitating his reborn “Adam.’ “That’s so corny,” Henry says as he addresses his protégé, then chokes as he almost says “I’m your father.” Specifically, his task is trying to guide the way Adam’s brain [re]wires itself… good luck with that, most biological parents are likely to scoff.

Henry (as in Mary Shelley’s Dr. Henry Frankenstein, of course) calls him Adam, then frets “Adam? That’s so corny. I’m your…” Cue: What a whiney millennial Frankenstein—he can’t even choke out “I’m your father,” validating Alex’s pre-Adam freak out when Liz dared suggest he’d be a “good, sweet dad.” And as if all this ‘I’m not your father’—hood weren’t bad enough, there’s “Uncle” Polidori (Joshua Leonard), who found the financing for the Adam project and is the definition of a bad influence, a coarse libertine whose sense of fun is stuck in frat-boy gear.

Longtime independent Larry Fessenden, whose Glass Eye Pix has consistently supported young genre filmmakers, returns to a classic story he first tackled 25 years ago in No Telling, with a modern-day Frankenstein story that returns to one of the novel’s core themes: The dense and complex relationship between parents and children, however ambivalent the parents and however challenging the child.

Mary Wollstonecraft Shelley’s genre-defining creature is simultaneously wounded and enraged by his monomaniacal father/creator’s dismal parenting—equal parts denial and flat-out rejection when his “baby” doesn’t turn out the way he wanted, though what he expected is vague, beyond a desire to beat nature at her own game. Fessenden’s Adam (no weight of association there) gets a gentler welcome to the world, but all too quickly he, too, disappoints; in part because Henry was right about brains rewiring. Adam’s brain does rewire itself—Henry just doesn’t like the paths down which the rewired streams of thought go. The brain/mind is always the sticking point; ask any parent of an aggressively willful adolescent.

Like most of Fessenden’s films, Depraved also uses the conventions of genre movies and dig beneath the pop-culture tropes to find the prickly truth beneath the myths. In Depraved Fessenden pokes around some uncomfortable truths—his specialty—and the result is a discomfiting horror film for the social-media generation.