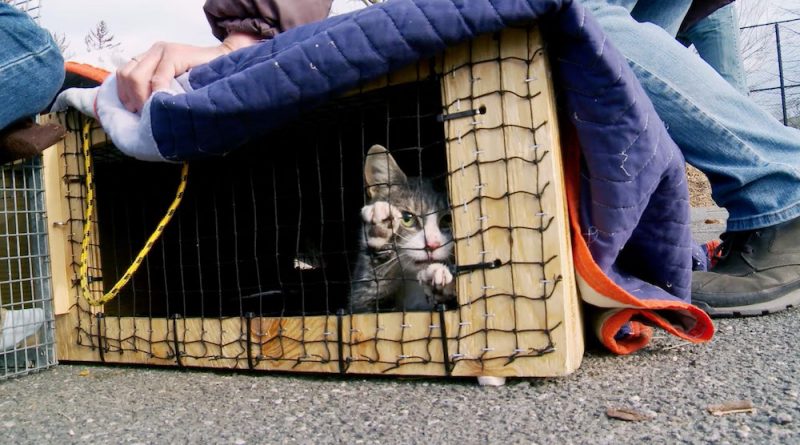 The mean streets of New York City are especially tough for the feral felines and abandoned house cats living in the America’s biggest city.

The scrappy crowd-funded documentary “The Cat Rescuers” follows four big-hearted, Brooklyn-based volunteers working to aid the throngs of toms and tabbies without homes.

Although the source of their statistics is fuzzy, filmmakers Rob Fruchtman and Steven Lawrence assert that at least 500,000 deserted and feral cats live in NYC. With the city unable to deal with the problem and animal shelters short on space, volunteers take to the neighborhoods to take care of the cats.

Among them is the spirited Latonya “Sassee” Walker, a single mom who works as a legal investigator and lives in a cramped Canarsie apartment with a clowder of rescued cats. She admits to routinely spending $300 a month on cat food, plus more on veterinary bills, and she’s inspired her teenage daughter to start rescuing cats, too. Her motto is “Don’t talk about, be about it,” and she’s walking that walk.

Tara Green, a nurse and health care administrator, moves from an apartment to a house near Coney Island so she will have more room for rescues, feeling compelled to save cats because she credits a pair of felines with saving her life when she was a depressed drug addict. Her concerned mother notes that she prefers her daughter’s current addiction to the previous one.

Stuart Siet, an electronics engineer who maintains radio communications for the NYC Fire Department, begins his days at 3 a.m. so he can feed all the street cats in Kensington Borough Park. He has turned his garage into a sanctuary for kittens.

Likewise, artist and graphic designer Claire Corey has converted the basement of her Bedford-Stuyvesant house into a kitty halfway house, with the loving if slightly bemused support of her husband. But the financial and emotional strain of the rescue life has begun to take its toll on Claire.

Besides caring for existing cats, the rescuers go on “trap-neuter-return” missions, paying sympathetic vets out of their own pockets to get strays fixed, since a female can get pregnant 30 minutes after giving birth. The film makes a strong argument for spaying and neutering your pets.

“The Cat Rescuers” has a interesting cast of characters and a clear, commendable mission. But it’s lacking in storytelling dexterity, with the filmmakers dangling intriguing strings of conflict and then batting them around aimlessly rather than threading them into a satisfying narrative.