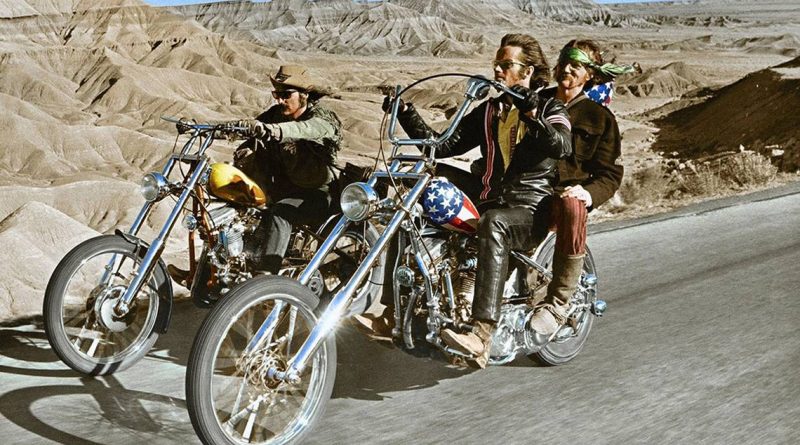 Bear with me here as I recount a few facts about and plaudits for Easy Rider. A monumental landmark, Easy Rider has been the subject of hundreds, if not thousands, of pages of analysis. The film received a belated sequel in 2012 (Easy Rider: The Ride Back, with none of the original actors or crew), and two documentaries have been devoted to its production history (Born to Be Wild [1995] and Easy Rider: Shaking the Cage [1999]). In addition, Easy Rider was given a deluxe Criterion Collection release, which includes audio commentaries by Dennis Hopper, Peter Fonda, and Paul Lewis, the film’s production manager. 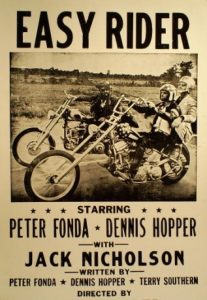 If numbers matter (and they do to Hollywood), the entire production cost less than $400,000 and grossed at least $60 million, according to the Worldwide Boxoffice website. The production costs listed prove a bit deceptive because Fonda reportedly charged significant travel costs with his own credit cards, and music licensing soared to a cool million dollars in postproduction. Given the impact of the music in driving the film and commenting on the social milieu, the investment certainly paid high dividends.

I cite these statistics and acknowledgements because I’ve often heard the film dismissed as “that cool counterculture movie, nothing more” (“counterculture” used so often to define Easy Rider that it may as well be part of its name). But this film is so much more in film history, both for its cinematic style and for its ability not just to express but to channel a milieu, a dissatisfaction — remember “(I Can’t Get No) Satisfaction” — and a profound longing to escape. Everything!

Because I was there, permit me to take you back to what this film meant to those of us who lived its longing, who yearned desperately for sanity, change, happiness, peace. You’ll have your own experience of this film now; I was there then, and this film mattered in ways few films do.

For all the information available about Easy Rider — the builders of the motorcycles, the heated arguments over the screenplay (who wrote what and when), the production conflicts and crises, the yin and yang of the meditative Wyatt (an amazing Peter Fonda aka Wyatt Earp) and the volatile Billy (a frenetic Dennis Hopper, aka Billy the Kid), the improvised insults of the locals, and the other incredible minutiae — to me what distinguishes and elevates the film is the visceral experience of it.

On the release of Easy Rider, I was in graduate school in the University of Kansas’ English Department. Word spread quickly about the appeal of this unprecedented, thrillingly unique film. It hadn’t yet appeared in Lawrence, Kan., so my roommate and I made a pilgrimage to Kansas City, my friend’s home city. It was all we expected and more, a late-1960s confrontation with staid cultural values and restrictive dictates. The soundtrack accelerated and defined the momentum, especially Steppenwolf’s Born to Be Wild propelling the early, exhilarating escape to the open road. It and selections from the Band, the Byrds, Jimi Hendrix, and others replaced mind-numbing tedium with mind-expanding fantasies induced by the music.

Steppenwolf’s incantation — “Head out on the highway/Lookin’ for adventure” — catapulted motorcycle riders and film viewers into a rarefied register of unfettered, illusory escape. We felt one with the spirit, and to hell with the thesis paper, the Middle English course, and the TA responsibilities — especially all those essays needing grading. We were free — at least for 95 minutes and however long the spell lasted, which was a considerably extended period.

Stylistically, cinematographer Laszlo Kovacs devised exactly the technical presentation that complemented and enhanced the film’s appeal. Shot over 12 weeks on the road, the film was described by Kovacs as minimalist filmmaking. In New Wave King: The Cinematography of Laszlo Kovacs, ASC (2002), edited by Ray Zone, Kovacs says: “We had the motorcycles in one truck and all the camera and lighting gear in another. There was no room for a dolly. My camera car was a Chevy convertible with a plywood platform. The film looks spontaneous, but don’t let that fool you. We rehearsed and staged every scene, and I lit to establish the mood and setting.” He inserted flash-forwards, jump cuts, choppy transitions, several frames from one scene alternating with frames from the succeeding scene — all in the service of the psychedelic trip. And we left thrilled, stunned, and overwhelmed by the shocking ending, painfully yearning for us not “to blow it.”

On the occasion of the film’s 50-year anniversary, with memories flooding back over me with a surprising immediacy, the question is whether Easy Rider can possibly hold up. Have we succumbed to our comfortable lives 50 years on? Has Easy Rider’s appeal considerably dimmed? Has life taken its toll on rebellious inclinations and dreams of independence or is there still that kernel of resistance and recall? Can the spirit of the time be revived and enjoyed as vicariously as we once did or is it now so foreign, so unusual, that its appeal has become anachronistic, all but elusive for contemporary viewers. The good news is that it does maintain its appeal. It still casts a spell. With energy and heart, it continues to project a doomed world of idyllic dreams that crash against reality, with the women as sexist props as objectionable now as then.

For fans of the film, I recommend the Criterion release with two audio commentaries (Hopper’s 2009 rambling discussion and Hopper, Fonda, and production manager Paul Lewis holding forth in 1995), a 1969 Cannes interview with Fonda and Hopper, and more. The Fonda/Hopper/Lewis commentary and readily available website articles detail numerous, fascinating bits of trivia on locations, Fonda’s hospital stay for pneumonia when the commune swimming dip was shot (hence Fonda’s presence all one shot close-ups done three weeks later), locals recruited as extras, the original ending, stories on the motorcycles purchase and theft, the “we blew it” being shot after the movie wrapped, etc.

As noted above, one of the most discussed and debated lines is Wyatt’s, “We blew it.” But having now re-watched this marvelous film four times, I’m haunted today by the exchange between George Hanson (Nicholson) and Billy (Hopper.) George astutely tells Billy, “They’re not scared of you. They’re scared of what you represent to them.” Billy repeats his belief that to those who revile them, “All we represent to them is somebody who needs a haircut,” echoing comments by the men at the diner. Billy responds: “Oh, no. What you represent to them is freedom. Freedom’s what it’s all about. . . But talking about it and being it, that’s two different things. It’s real hard to be free when you are bought and sold in the marketplace. Don’t tell anybody that they’re not free, because they’ll get busy killing and maiming to prove to you that they are. They’re going to talk to you and talk to you about individual freedom. But they see a free individual, it’s going to scare them. Well, it don’t make them running scared. It makes them dangerous.”

Given today’s fraught political climate, events that have unfolded over the fifty years since Easy Rider’s debut, this insightful observation about the contentious late ‘60s reaches powerfully to inform 2019. Fighting on, then and now, we can’t let anything dampen our enthusiasm or diminish our determination. Feeling this, I never fail to get an electric jolt when I hear “head out on the highway” or, admittedly, to feel a bit like Gatsby, my past regrettably receding.