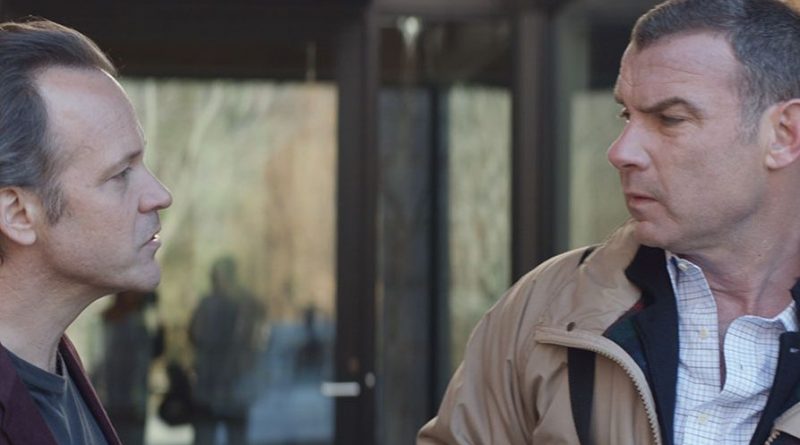 Strong performances from a stellar ensemble anchor Human Capital, an adult drama about decisions made and consequences suffered, told from the perspectives of several characters from two different families — one wealthy, one not — in upstate New York.

The film opens with a hit and run accident: a restaurant worker biking home is struck on a dark and winding, dark road and later dies. The action then shifts to real estate agent Drew (Liev Schreiber) who drops his teen daughter Shannon (Maya Hawke) at the home of her boyfriend Jamie (Fred Hechinger). It’s a sprawling, modern estate and Drew is enticed, especially when he meets Jamie’s dad Quint Manning (Peter Sarsgaard), a smarmy hedge fund tycoon. Over drinks, Drew’s eagerness to be part of this moneyed world is palpable. He can’t afford it — we learn later that he’s a recovering gambler and that his second wife (Betty Gabriel) is expecting twins — so he fudges the numbers to get a loan and gives Quint $300,000 to invest.

The midsection of the film belongs to Quint’s wife, Carrie (Marisa Tomei) who’s frustrated with being controlled by her husband and guilty for enjoying the spoils of being married to him. Carrie, a former actress, wants to invest in a crumbling old theater and turn it into a performance arts center. But Quint’s hedge fund is going belly up, leaving a disappointed Carrie and a devastated Drew.

The back and forth structure comes together in the last act, when the fatal accident resurfaces. The cyclist was struck by an SUV belonging to Jamie, who was drunk at a party. Police home in on whether it was Jamie driving the car, or Shannon, or her new boyfriend, the struggling Ian (Alex Wolff). Drew is drawn in rather too conveniently but the outcome is as troubling it is inevitable.

Human Capital is based on American writer Stephen Amidon’s 2004 novel which was made into an excellent film by Italian director Paolo Virzi in 2013. The new version is less a searing commentary on class than Virzi’s version which seems a missed opportunity but Oren Moverman’s screenplay is smart and absorbing and director Marc Meyers handles the non-linear structure with skill.