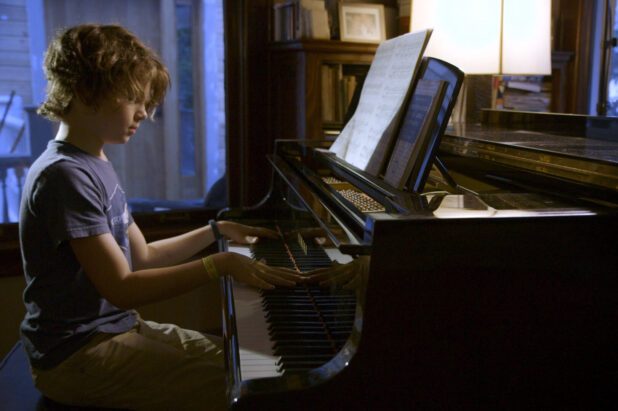 You’ve undoubtedly heard Ludwig van Beethoven’s “Moonlight Sonata.” But you may not know he wrote it while losing his own hearing.

That fact provides crucial context— or counterpoint, if you will — for Moonlight Sonata: Deafness in Three Movements.

A sequel of sorts to documentarian Irene Taylor Brodsky’s 2007 Hear and Now (an award-winner at the Sundance Film Festival, where Moonlight Sonata debuted earlier this year), the new documentary explores a range of intriguing themes.

Beethoven’s own anguish plays a supporting role, in the form of fanciful watercolor animation (by Brian Kinkley and Ben Luce) that reflects the composer’s emotional upheaval while creating his immortal work.

But the central conflict involves more contemporary characters: the filmmaker’s 11-year-old son Jonas and her parents Paul and Sally.

Hear and Now recounted Paul and Sally’s decision, after a lifetime of deafness, to have cochlear implant surgery, enabling them to experience life surrounded by sound.

Jonas has that surgery at a much earlier age, giving him access to things — including music — his grandparents spent much of their lives without.

Jonas becomes captivated by Beethoven’s “Moonlight Sonata” and convinces his skeptical piano teacher to let him play it at a future recital.

As Jonas immerses himself in the music, however, his connection with his hearing-impaired grandparents threatens to fade — just as his grandfather, showing the first signs of dementia, faces additional sensory loss.

It also explores haunting questions of “normalcy” and human differences — as when, in one quietly devastating scene, a counselor likens deafness to a “typo” in the family’s genetic code. (The musical term “variation” seems far more appropriate.)

Yet the documentary also displays a welcome that’s-life vibe, mixing 8mm footage of Paul and Sally’s happy past with scenes from Jonas’ just-a-kid present, whether he’s energetically playing video games or cadging candy from his piano teacher with impish glee.

More than anything, perhaps, Moonlight Sonata provides a powerful reminder (as if we needed one) that truth can be far more compelling than fiction.