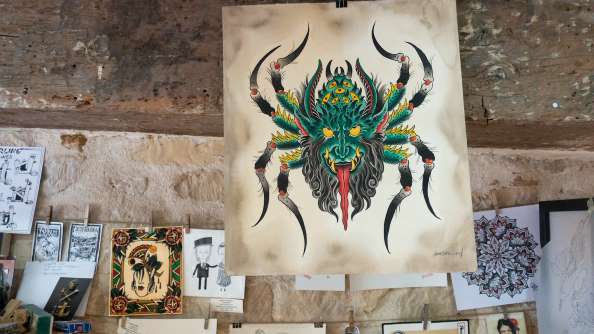 You’ve probably always wanted to see Werner Herzog’s tattoo, am I right? Now’s your chance. Folklorist, writer, and filmmaker Alan Govenar’s documentary Tattoo Uprising features vintage footage of the mercurial auteur showing off his Ed Hardy design, as well as other footage dating from all the back to 1980 to the present day, and interviews with noted artists and tattoo aficionados including Hardy, Stoney St. Clair, Cynthia Witkin, and Anne de Hey!. It was shot, in part, by the late director/cinematographer Les Blank, who helmed the award-winning 1982 doc Burden of Dreams, about Herzog’s production of Fitzcarraldo.

There are plenty of documentaries, as well as tv shows, that are centered on either the history or the current world of tattooing. (https://en.wikipedia.org/wiki/List_of_tattoo_TV_shows) There are magazines, conventions, and multiple “Tattoo Artist of the Year” awards around the globe. If you’re well-versed in that subculture, this film might be most of interest for the footage of 70s tattooist Stoney St. Clair. Govenar produced the documentary short Stoney Knows How in 1981, which was shown at the Museum of Modern Art, and one assumes this feature expands on that film. Tattoo Uprising is also a rare instance where Herzog shows (and crows about) his tattoo, which was inspired by the one he saw on Les Blank’s arm. Hearing Herzog wax poetic about the inked image of death laughing as he stands at a German microphone, saying, “you shouldn’t have yourself tattooed without at least one death”, and calling Ed Hardy ‘very weird’, is pretty entertaining.

There’s also a bit of background abput the history of tattooing, an examination of folk culture and Christian tattooing, as well how the shift from inking as craft occurred. St. Clair saw himself, and many now see Norman Collins, who was also known as Sailer Jerry, as craftsmen. Ed Hardy and many current tattoo artists see themselves as artists. The movement towards acceptance in both high art and lowbrow art circles and the proliferation of gallery and museum shows is covered, and that too is interesting. One gets the sense, however, that this process is shown mostly from the perspective of Ed Hardy fans. As a non-tattooed art geek, I’m not sure if the whole subculture sees it that way, but Governor certainly makes an argument for that being the case.

So, who is Tattoo Uprising for? It offers a look into the recent past with a young Hardy, and a wizened St. Clair, as shot by Les Blank, and that must certainly be of value to tattoo devotees. As for the rest of us, we get a surface understanding of the subculture, including some of its style origins in prison. However, I would have welcomed a more inclusive perspective, that spent more time examining its origins with indigenous peoples around the world.