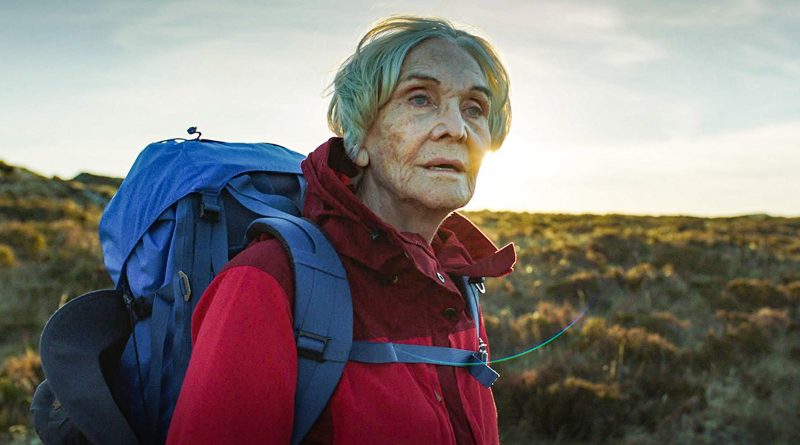 Fully embracing the idea that it’s never too late to follow a dream or try something new, Edie introduces us to a tenacious octogenarian who refuses to close the book on her life without — literally — climbing one last mountain. Sheila Hancock delivers a compelling lead performance as the titular Edie in director Simon Hunter’s poignant British dramedy about life, aging, friendship, and regret. 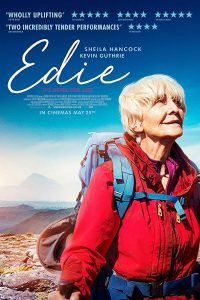 After Edie’s longtime invalid husband dies, she finds herself — for the first time in decades — unsure about what comes next. Her daughter Nancy (Wendy Morgan) is dismayed to discover hard truths about her late father and to learn that her mother’s life has largely been unhappy, dominated by duty and regret. She’s ready for Edie to fade out of this world quietly, tucked away in a retirement home. But Edie has other ideas. In happier times, she had planned to climb Scotland’s Mount Suilven, and she decides that now is the time to finally make good on that adventure.

Undaunted by anyone who questions her plans, Edie heads for the highlands, where she meets Jonny (Kevin Guthrie), a young man who helps her out of a tight spot and soon becomes her outdoor-adventure guru. He helps her plan for her ascent, and she gradually comes to trust his advice — and count on his companionship. Their friendship feels genuine, thanks to Elizabeth O’Halloran’s script and both Guthrie and Hancock’s performances. His Jonny is earnest and thoughtful, and her Edie is fierce but also vulnerable.

Together, they work on a plan to conquer the daunting Suliven, which is captured beautifully in August Jakobsson’s sweeping Scottish cinematography. The mountain serves as both a metaphor and a concrete goal, and Edie’s determination to conquer it will strike a chord in anyone who’s ever thought they might have missed their chance to do something big or meaningful. — Betsy Bozdech

MaryAnn Johanson Edie is no twee-old-lady tale, most emphatically not *The Best Exotic Extreme Adventure.* The magnificent Sheila Hancock crafts a portrait of elder womanhood as a tangy triumph of risk-taking over regret, and resolution over resignation. Her Edie is much more profoundly bitter than pop culture is typically comfortable with: “I wasted so much time doing nothing,” she practically howls… and by “nothing,” she is referring to marriage and motherhood. That’s as extreme as her plan to climb that mountain, her acknowledgement of how freeing it is for her to finally be free of the social traps women are presumed to be fulfilled by, which were even tighter for her generation. Read full review.

Nell Minow: There are two stunningly beautiful sights in Edie, about an 83-year-old woman who wants to climb a mountain. The first is the breathtaking scenery of the Scottish countryside. The second is the lovely face of actress Sheila Hancock, a veteran of the Royal Shakespeare Company, as Edie, and the growing friendship between Edie and Jonny has an understated but very genuine warmth.

Sandie Angulo Chen: Director Simon Hunter’s Edie (written by Elizabeth O’Halloran) is a quietly poignant film with an extraordinary performance. Classically trained Shakespearean English actress Sheila Hancock is, like her titular character, an octogenarian. She’s also fabulous, expressive, and has the most startlingly luminous face. The widow of a controlling man, Edie has decided to climb a mountain in Scotland she once hoped to climb with her own father — but her late husband wouldn’t allow it. The heart of the movie isn’t the backpacking trip itself but her blossoming friendship with Jonny (Kevin Guthrie), a local young outdoorsman she hires as her guide and trainer. She’s frosty and stubborn, and he’s frustrated and put-upon, but eventually all the training hikes and campouts lead to a meaningful intergenerational friendship. More than that, the film is an exploration of an older woman’s determination to reconnect with her truest self.

Jennifer Merin Edie is an absolutely charming and heartwarming British character-driven adventure in which ever-compliant 83 year-old Edith Moore turns tenacious, escapes the retirement home in which she’s been placed (warehoused, actually) by her daughter and sets out on a long-delayed adventure to conquer challenging Mount Suilven in the Scottish highlands. Edie accidentally hooks up with Jonny, a local lad who agrees to serve as as a guide. On their shared ‘walk,’ the determined, down to Earth and newly free-spirited Edie and the clever, well-meaning and somewhat bumbling Jonny become great pals — but their journey is not without some real risks. Superb performances by Sheila Hancock, still beautiful at age 86, and the ever so charming Kevin Guthrie drive the adventure to a thrilling conclusion. And August Jakobsson’s cinematography so exquisitely captures the glorious Scottish landscape that you can almost breathe the breezy fresh air. Expect peak inspiration when you view Edie.

Leslie Combemale Elevated by a wonderful performance from longtime Royal Shakespeare Company actor Sheila Hancock, Edie stands firmly in the “It’s Never Too Late” school of storytelling. Hancock stars as the title character, who, after a life of caregiving dedicated to others, determines to climb Mount Suilven in Scotland, with the help of camping guide and new friend Jonny (Kevin Guthrie). Director Simon Hunter leans into the empowering aspect of the story, but though the film treads towards sentimentality, Edie’s character has such tenacity, and the developing friendship between her and Jonny is so rooted in kindness, we all go along for the ride. The Scottish landscape is breathtaking, and seeing 83 year old Hancock set against the wilds of the highlands is inspiring to say the least. It’s a delightful reminder there should be more stories featuring older actresses released and celebrated.

Loren King There are many things to savor in this charming late-in-life discovery/adventure story. Foremost is the lovely presence of veteran British actress Sheila Hancock as the title character, an 80-something woman who, upon the death of the husband she never loved but still took care of, packs her bags, leaves a voicemail for her daughter, and sets off on a life-affirming trip to climb Mount Suilven in the Scottish highlands. Along the way, she meets Jonny (Kevin Guthrie), a young hiker whom Edie hires to be her guide. It’s a paying job at first, but as Johnny helps Edie get sorted out with her gear — buying proper hiking boots and a cooking stove to replace her antique one, for starters — he soon grows fond of Edie, as the audience will, too. As Jonny, inspired by Edie’s determination and touched by her vulnerability, pushes her past her own limitations, Edie’s confidence to pursue her long-standing dream strengthens. But she also realizes she’s dependent on the young man which, she explains to him, defeats the point of her quest. When Edie decides to set off to scale the mountain on her own, the film becomes “Wild” for the senior set. The stunning scenery is matched only by the weary but resilient Edie, a character and a performance by Hancock that you won’t soon forget.

Sheila Roberts Sheila Hancock turns a sentimental role into a sublime performance as the newly widowed Edie whose courage and determination take her places her body can barely go anymore. Kevin Guthrie’s performance is heartfelt and convincing as the charming, well-intentioned Jonny. The generational gap between their characters offers interesting perspectives and makes for some very tender, uplifting moments. Read full review.

Liz Whittemore Edie has breathtaking cinematography that is like an ode to nature. Sheila Hancock as our titular leading lady is captivating in her vulnerability. Her sweet chemistry with costar Kevin Guthrie shines a light on generational differences without being cliche. Some of the most powerful moments come in the absence of dialogue. The score by composer Debbie Wiseman is gorgeous. Edie is a lovely film about determination and rediscovery of self.

Marina Antunes The thought that life is passing us by is something many of us fear, including the titular character in Simon Hunter’s new film Edie. When Edie, the wonderful Sheila Hancock, finds herself widowed after decades of silently looking after her husband, she decides to finally do something for herself. Unwilling to let preconceptions deter her, she sets off to fulfil a life-long dream of climbing a mountain in Scotland.
Edie is a heartfelt tale of unconventional friendship, self-discovery and never giving up on our dreams.

Cate Marquis In the British “it’s never too late” charmer Edie, the wonderful Sheila Hancock plays Edith Moore, a 83-year-old British widow who has spend a lifetime caring for her domineering husband. On the verge of moving to a retirement home, Edie suddenly remembers the “wild child” she once was and decides to run away to Scotland and climb a mountain. Of course, it is more complicated than that – why she leaves at that moment, why that mountain, why Scotland and even why her. Edie pulls us in as it reveals those details, against the lovely backdrop of the Scottish Highlands, but the real draw is Sheila Hancock, who delights with her feisty performance. When Edie runs away to Scotland, she runs into Jonny (Kevin Guthrie), a young man who has his own problems, or more accurately he runs into her – literally. Circumstances bring these two dissimilar people together with the common goal to climb Mount Suilven. There are comic moments, sure, but while another film would just play this story for laughs, Edie goes in a more thoughtful direction and keeps one foot in the real. It becomes a journey of self-discovery, of friendship whatever your age, and the realization that it is never too late to have a dream. Buoyed by Sheila Hancock’s sterling performance, Edie is a delightful little film for the dreamer in all of us, at whatever age.