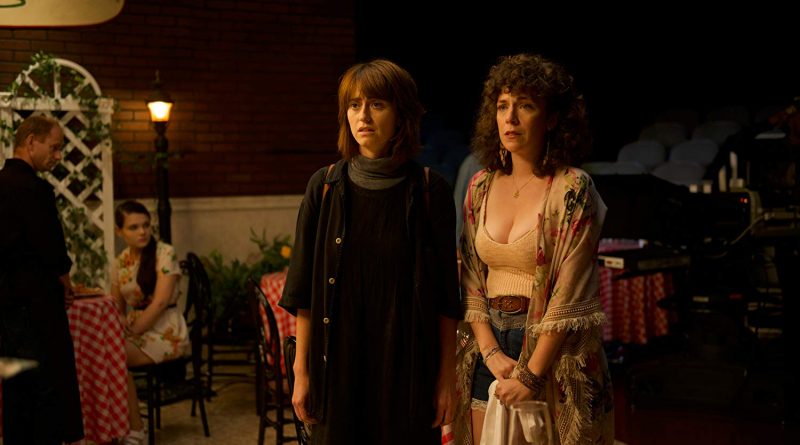 Before You Know It offers a peek into process.

Some films need to be seen, not for their polish but for their practice. Before You Know It is one of those films that had promise and that delivers on some of that promise. The director and writer and actors went to workshops, and everyone added curiosity and kindness to the process.

Co-writers and actors, Hannah Pearl Utt and and Jen Tulloch, play sisters, Rachel and Jackie (why are so many screen sisters named Jackie, hmmm?). The co-dependent sisters include a responsible nudge and a flibbertigibbet with serious decolletage. Both are daughters of a needy actor, played by the great Mandy Patinkin. He runs a theater and pretends to write to please his steadier daughter, who says to him, “I need you to have a life so I can finally have one.” One is the mediocre mother of a pretty confused little girl named Dodge.

Dad dies early on. That plot point is not a spoiler but a requirement that leads to the real plot, which is: the sisters discover that their mother is not dead after all. The veteran actor Judith Light plays the absentee mom. She’s an actor in a soap opera whose make-up resembles a corpse’s, but, then, her character’s about to be bumped off. Luckily, Rachel is well-skilled to rewrite those scripts. So which daughter does the mother need more, and which daughter of the three needs the most mothering?

Tullock is pretty wonderful as Jackie, and even though his role is superfluous, Mike Colton is always a pleasure to watch.

Before You Know It is hardly A+. The directing by Utt is more of a B, but everyone collaborates. The film is uneven, like a pie with only some of the meringue reaching peak phase. Even though the rest might be a tad flat, it still tastes as good and is worth registering for its moxie — especially since it’s by women and about women, a tale of dependency for everyone.