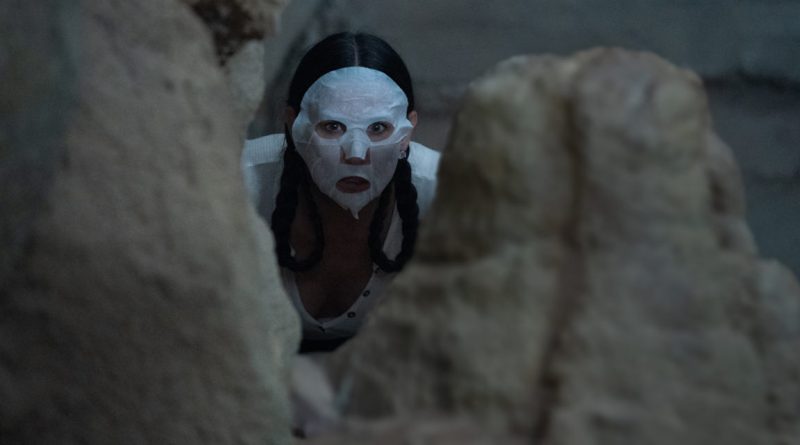 Now in theaters and VOD, Patrick Brice’s wannabe horror comedy revolves around eight employees at a failing company and their egotistical boss who forces them to participate in a dangerous cave-diving excursion.

Lucy Vanderton (Demi Moore) is the ruthless CEO of Incredible Edible Cutlery, a company battling the detrimental effect that plastic utensils have on the environment. To promote team-building, she’s arranged a corporate spelunking weekend with Brandon (Ed Helms) as their guide.

When there’s a seismic tremor and giant rocks block their only escape tunnel, they’re all entombed in a large, underground cavern with little or no hope of rescue.

A “DAY ONE” title card indicates that their entrapment won’t be short and, when their food – a box of sample products – is depleted, their inevitable starvation leads to an absurd debate about the morbid logistics of cannibalism.

Superficially scripted by Sam Bain (co-creator of British TV’s “Peep Show”) and haphazardly directed by Patrick Brice (“Creep,” “The Overnight”), it’s all about mocking the insidious dynamics of workplace politics and catering to a narcissistic boss – with Britney Spears contributing a voice cameo.

On the Granger Movie Gauge of 1 to 10, “Corporate Animals” is an inconsequential, tiresome 3, a sub-standard, if subversive satire.