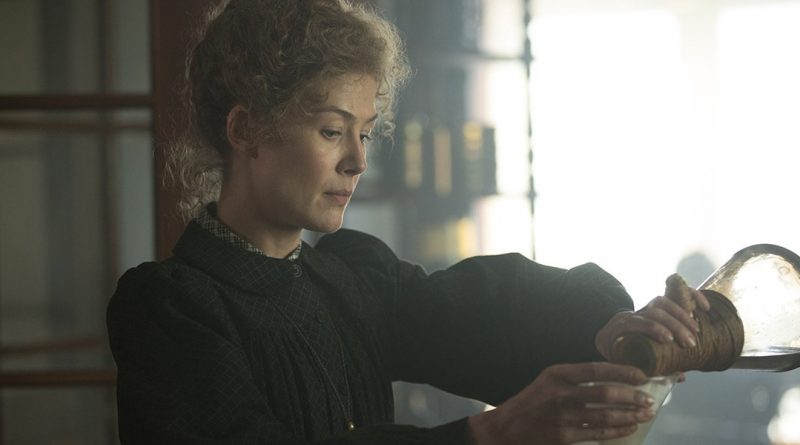 First coming to public attention in the early 2000s with her autobiographical graphic novels Persepolis and Persepolis 2, she adapted the former to a feature film in 2007 with co-director Vincent Paronnaud which went on to win the Special Jury Prize at the Cannes Film Festival. Satrapi is notable for her refusal to be locked down to any single mode of creative expression, her impressive talents spanning art, writing and filmmaking.

From the animated Persepolis that tells of her childhood in Iran and her teen years growing up in Europe to the talking animal serial killer black comedy The Voices with Ryan Reynolds from 2014, with Radioactive Satrapi once again proves she is a highly adaptable, even capable of breathing life into that most hackneyed of film genres, the biopic.

While on the surface a beautifully rendered period piece that paints a compelling portrait not only of Curie herself but the broader context where she did her pioneering scientific work, Satrapi is not content with merely bringing a WIkipedia entry to life. She digs deeply into the ethical quagmire of the dark legacy of some of Curie’s most celebrated achievements.

Curie was not only a central figure in the discovery of radioactivity and its potential, but she coined the term itself, discovering two new elements, radium and polonium. Working closely with her husband Pierre Curie, the film tracks their personal relationship as well as their professional collaboration, with a particular emphasis on Marie’s headstrong (and often straight-up stubborn) personality, the difficulties both Curie’s faced in getting Marie’s central role in their research formally acknowledged, and the challenges and scandals Marie faced later in her life after Pierre’s accidental death in his mid-40s.

As the film takes great pains to emphasize, the Curie’s research lead to both of them suffering radiation sickness, the exposure of which led directly to Marie’s death at the age of 66. The film begins as she collapses in her laboratory, and the story that follows is told predominantly through flashbacks as Marie (played in an award-worthy performance by Rosamund Pike) is trundled through hospital corridors on a stretcher.

Yet while containing elements of both the love story and the period drama, what elevates Radioactive well above the level of the pedestrian biopic is Satrapi’s determination to tackle the long-term horrors that Curie’s research led to. The filmmaker is unflinching on this front, weaving Curie’s story with brief but shocking vignettes of the impact of atomic energy; these flash-forwards include the bombing of Hiroshima in 1945 and the 1986 disaster at the Chernobyl Nuclear Power Plant.

Running alongside this, however, are also the benefits of Marie’s legacy. Medical procedures such as x-rays and cancer therapies also are granted important screen time; Satrapi has no interest in making any simplistic final moral call on the ethical status of this research in terms of the bigger picture, but rather seeks to articulate that these consequences – while both very real, and both negative and positive – are, as one character words it, like ripples in the water after a stone has been thrown.

Radioactive shuns all cynical expectations of the biopic being a milquetoast tick-the-box exercise in autobiographical lip service as Satrapi seamlessly balances Marie’s accomplishments and struggles with the more complex realities that haunt her legacy. Compelling, creative, thoughtful and undeniably beautiful, Radioactive confirms Satrapi’s status as one of the most original and important filmmakers working today.