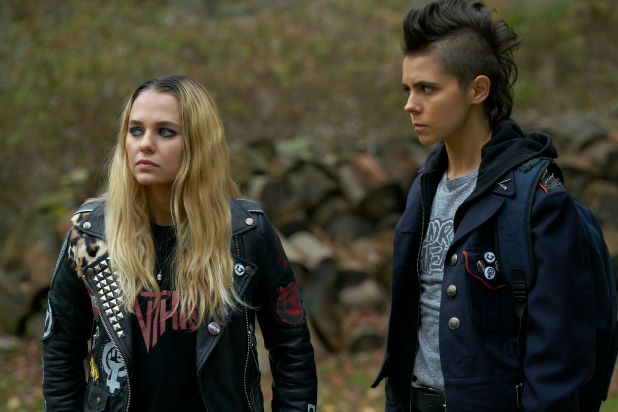 Imagine a post-apocalyptic Stand By Me where queer girls rule and save the day, and you have a vague idea of the aesthetic of the Canadian uber-indie thriller Riot Girls. The film is filled with up-and-coming female filmmakers, including director Jovanka Vuckovic, writer Katherine Collins, producer Lauren Grant, and a host of other below-the-line artists, including cinematographer Celiana Cardenas, production designer Jennifer Morden, and editor Maureen Grant. The sisters aren’t just doing it for themselves behind the scenes, Riot Girls is an escape thriller where, in an alternate 1995, all adults are dead from a mysterious illness, and the haves and the have-not teens are at war. So far, so bad boy-centric, right? Actually, no. Onscreen, great girls are all over this joint, doing it for themselves and everyone else, too. In that respect, it absolutely mirrors life in the here and now.

Lead characters Nat and Scratch are girlfriends in all the best senses of the word, and they are at the heart of the story, kicking jock ass and saving male members of their gang. At no point do the young men become the rescuers. They are relegated to secondary status, a welcome change to what we normally see in horror or dystopic plots. Queerness taking a back seat in Nat and Scratch’s doings, and making their romance just part of their arc is something many filmgoers crave but rarely get to see onscreen. Nat and Scratch’s love for each other doesn’t uniquely define them, it just is.

Riot Girls appears to be placing itself firmly in the Splatterpunk genre, but it keeps the gore to a minimum. That reticence may be misplaced. The comic book transitions, a la iZombie, the punk and hard rock soundtrack, and costuming telegraph an edginess that begs fulfillment in a way that doesn’t see a payoff, beyond some meticulous production design. More bloodshed would have sealed its place in the genre, and added more appeal to that subset of horror fans. Look to Mary Harron’s American Psycho for a How-To guide in gore-fueled greatness. This fan noticed, for example, after Nat was sprayed with blood, she went back to having perfect makeup a few scenes later. Those kind of inconsistencies will lose them potential evangelists, which every indie needs. Indeed, at times, the movie does feels a bit like a film school project trying its best to make a retro cult classic.

Or, perhaps on the other hand, the film is rated PG-13, and as such is definitely geared towards a pre-teen and teen viewership. Since I have a stepson who watched King Kong and loved it as a toddler and became a huge horror fan even as a child, I can definitely co-sign the concept of creating a horror or post-apocalyptic thriller meant uniquely for a younger audience. Bearing that in mind, there’s about as much gore as any parent would accept. Certainly, they/thems, she/hers, and queer kids who don’t yet know their pronoun will appreciate seeing themselves as independent badasses onscreen.

Backed by songs like Joan Jett’s Bad Reputation, and driven by its enthusiastic female co-stars, Riot Girls should find its audience. We should all keep Vuckovic, Collins, and Grant on our radar for future projects, especially as they now have a proven track record of supporting women above and below the line and support putting women and queerness front and center in their stories.