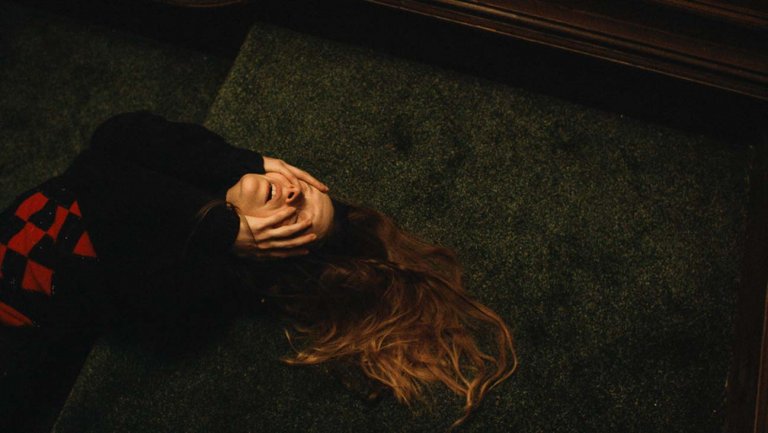 As the only woman-directed film in TIFF’s iconic Midnight Madness program in 2019, the world premiere of Saint Maud demonstrates British director and screenwriter Rose Glass’s flair for horror with this extraordinarily powerful feature film debut.

Played with impressive nuance by Welsh actor Morfydd Clark, the eponymous Maud is revealed almost immediately as delicately pious in a near-childish way; there’s parallels to be drawn with SIssy Spacek’s Carrie in this sense, both characters adhering to Pauline Kael’s description of Brian De Palma’s protagonist as a “squashed, froggy girl”.

Earnestly saying grace over her bowl of soup in her dingy bedsit in a bleak seaside town, May prays that her new job as a palliative care nurse will allow God the opportunity to reveal to her the path she so desperately seeks to prove her devotion. Having been a nurse for just over a year, she has recently left a hospital job and a very different life after a traumatic incident. While not overcooking it, Glass provides enough information about Maud’s past to give us an emotional picture (as much as a narrative one) of how the young woman ended up where – and, more importantly, who – she is when we join her story.

Maud’s new patient is Amanda Kohl (Jennifer Ehle), a 49-year-old one-time dancer who is dying of lymphoma of the spinal cord. At one point early in the film, Maud sees on Amanda’s bookshelf a book the dancer wrote, and its title – The Body is a Stage – is a perfect description of Glass’s film itself. As Maud explains to Amanda in her attempt to convert the dying woman to Christianity, she feels God as a physical, embodied presence, one she demonstrates as being literally orgasmic. Through their collaboration, Glass and Clark render Maud’s body itself the location for the film’s increasingly intense dramatic action to play out both on and through, peaking with its unforgettable climax.

Fluctuating between fascinated and mocking of Maud’s undisguised religious devotion, Amanda teasingly encourages Maud’s sense of her mission to convert her patient by calling her “my little saviour”. Amanda’s gift to Maud if book of William Blake’s artwork leaves an indelible impression on the young nurse’s clearly unravelling mind, and when she is (almost inevitably) fired, things rapidly unravel as Maud’s is spiritually, physically and psychologically is pushed to her limits.

Glass plants the seeds for Saint Maud both narratively and thematically at the collapsing intersection of faith and doubt, right and wrong, sanity and insanity, and devotion and desertion. Simultaneously a compelling character portrait and a moving horror-tragedy, Saint Maud is driven by a powerful performance by Clark, and on all counts a comfortable contender for horror film of the year. Glass’s debut dances to its own beat with assured precision, and marks the arrival of a filmmaker as fearless as she is talented.