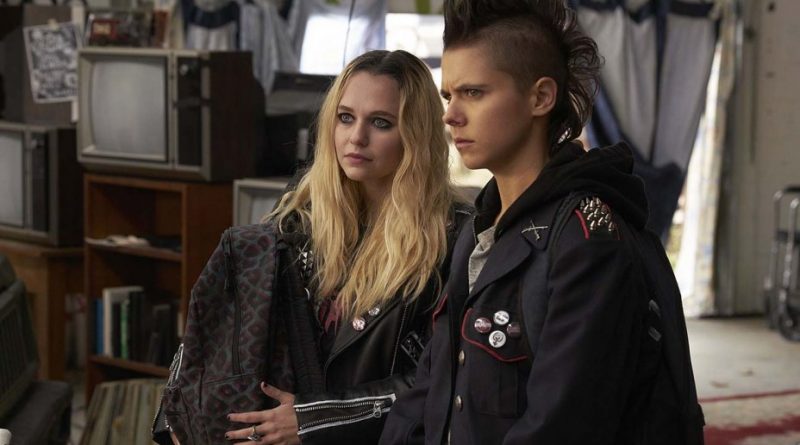 Scrappy and full of style, “Riot Girls” is a memorable first feature from director Jovanka Vuckovic, who shoots for cult-movie status with her story of warring teen factions in an alternate 1995 ravaged by a disease that’s wiped out everyone past the age of pimples and angst. While it’s suggested that the unnamed illness wreaked havoc everywhere, the movie’s action all takes place in the town of Potter’s Bluff, where the Eastsiders (rough and tumble but well meaning) and the Westsiders (privileged jocks) battle over territory and resources. 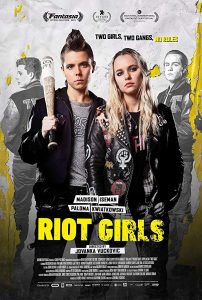 Things come to a head when Eastsider leader Jack (Alexandre Bourgeois) is captured and sentenced to death by the Westsiders after he kills two of their gang during a scavenging mission. It’s up to Jack’s sister, Nat (Madison Iseman), and her best friend/girlfriend, Scratch (Paloma Kwiatkowski) to rescue him — but can they trust the Eastside defector who promises to help them get to Jack in time?

It’s the stuff of any number of dystopian YA novels, but there’s a reason those stories are so popular, especially with teens: They put young characters in extreme circumstances and empower them to actually DO something, rather than just waiting around for life to get started. And they speak to the power and strength of chosen families — as well as humanity’s unfortunate tendency to fill a void in leadership with cruel tyranny (the Westsiders are under the thumb of the brutal, power-mad Jeremy, played with ’80s-movie-preppy-gone-bad energy by Munro Chambers).

Combine all of that with cool comic book graphics, bursts of graphic violence, and tough but vulnerable performances by stars Iseman and Kwiatkowski, and you have all the makings of a cult fave. Riot Girls is a movie teens might actually admit to liking — and that in itself is an achievement. — Betsy Bozdech

Marina Antunes Jovanka Vuckovic’s feature film debut Riot Girls is an entertaining take on the post-apocalyptic genre; this time imagining a world run by teenagers after an illness wipes out the adult population. Visually falling somewhere between TV’s Riverdale and The Warriors, Vuckovic’s foray into feature films is an entertaining tale of friendship which shows great promise from the talented director.

Pam Grady: Seemingly inspired by a South Park episode—seriously, Riot Girls’ conceit of a town separated into factions by its children and teens after all the adults die weirdly parallels The Wacky Molestation Episode where the kids of South Park become two warring sides after all their parents are sent to jail—this teen fantasy also takes its cues in equal measure from the latest rage for young adult dystopia and decades of exploitation flicks. Not that any of that is a bad thing. If not exactly original, at least Riot Girls is wildly entertaining in its jailbreak yarn as Scratch (Paloma Kwiatkowski) and Nat (Madison Iseman), a pair of badass, working class girls from the East Side, sneak into the upscale West Side—a tyrannical society run by out-of-control jocks and lorded over by a putrid specimen of toxic masculinity—to free one of their own. Riot Girls is a thrilling joy ride of a movie, energetic, violent, and action-packed, with two strong heroes to root for in Scratch and Nat.

Leslie Combemale Imagine a post-apocalyptic Stand By Me where queer girls rule and save the day, and you have a vague idea of the aesthetic of the Canadian uber-indie thriller Riot Girls. The film is filled with up-and-coming female filmmakers, including director Jovanka Vuckovic, writer Katherine Collins, producer Lauren Grant, and a host of other below-the-line artists, including cinematographer Celiana Cardenas, production designer Jennifer Morden, and editor Maureen Grant. Read full review

Jennifer Merin In her first feature, Canadian filmmaker Jovanka Vuckovic uses comic book art and animation to enhance the live action storytelling about an alternative 1995 where only kids have survived a plagues that’s killed off all adults. Scripted by Katherine Collins, the film is set in a suburban town that’s divided into the Westside and Eastside, two separate realms where two rival gangs create different lifestyles for survival. There is the group of wealthy kids who are ruled by a brutal teenage jock cum dictator and a ‘family’ of free spirited scavengers who live communally under the leadership of Jack. When Jack is taken prisoner by the jock’s minions, two girls are the capable and energetic heroes who take action to save him. The film is a well-crafted and entertaining dystopian YA fantasy. And, most of the production crew were women!

Nell Minow: If John Hughes, SE Hinton, Mad Max, and Joan Jett got together to make a movie, it might look like this stylish punk story of rival teen gangs, with tough, smart heroines and ultra-dynamic energy.

Liz Whittemore Riot Girls is like a graphic novel inspired, punk rock Lord of the Flies. Good Vs evil, rich Vs poor, it is a survival story on steroids. Kids learning to trust one another and navigate a world where there are no adults is a fascinating social experiment in its own right. How quickly do humans devolve into an animalistic state? Adding nuance with unanswered questions and evolution of the plot makes Riot Girls incredibly engrossing and downright cool.

Susan Wloszczyna: Riot Girls, the feature debut of Canadian director Jovanka Vuckovic, has plenty punk-rock spunk, oodles of rebellious attitude and a taste for nasty, blood-splattered violence. It places us in a post-apocalyptic world in 1995 where all the adults are dead from some grungy disease and the surviving young people are split in two groups. There’s the Westside Titans whose kingdom is a high school that is ruled by Jeremy (Munro Chambers), a despotic little twerp who lords over his jock contingent. Much more fun are Eastsiders Nat (Madison Iseman) and Scratch (Paloma Kwiatkowski), who don’t let their attraction to one another get in the way of rescuing Nat’s brother from the clutches of the Titans. The f-bombs are plentiful and the killings are fairly medieval. But most of the energy on screen is supplied by the two female stars, a Mad Max-like fixation with cars and a retro punk soundtrack including, of course, Joan Jett’s Bad Reputation. What is lacking from this dystopian universe, however, are any compelling details of the survivors’ existence and a fully fleshed-out story. Vuckovic employs a comic-book framework with graphics and words, but at 81 minutes, the movie feels underdone.

Sandie Angulo Chen: Riot Girls is a retro, post-apocalyptic action romp featuring badass queer girls, narcissistic jocks, and frightened young adults just trying to survive. In a world where all the adults have died off from a mysterious supervirus, the kids left behind are decidedly not all right. They’re divided into Lord of the Flies-style factions – the affluent gang on one side of a bridge (with the high school as their HQ), and the lower-income kids on the other, less-resourced part of town. Propelling the story is two charming, courageous, and unstoppable young women – Scratch (Paloma Kwiatkowski) and Nat (Madison Iseman) – who are ready to do whatever needs to get done to save their friend and brother from the clutches of the greedy jock gang. Director Jovanka Vuckovic and screenwriter Katherine Collins know how to tell a riveting story that subverts teen-movie tropes and makes for a rousing (if bloody) film.

Cate Marquis Women are finally taking charge in film making, in front of the camera and behind as well. One example is Riot Girls, a low-budget young adult action/horror film with a female director, writer and several in the crew. The story is set in an alternate 1990s, where a mysterious sickness has wiped out all the adults, leaving teens in charge. In one small town, the surviving teens have divided into two groups, the iron-fisted, organized jocks on one side and the looser, more relaxed “outsiders” on the other. Are you thinking John Hughes? Yes, while the fashions and music are ’90s, this film draws heavily from both ’80s teen films and ’70s horror films, but it also mixes in comic book/graphic novel animations, a nice touch. When the leader of the outsiders, Jack (Alexandre Bourgeois), is kidnapped by the leader of the jocks, Jeremy (Munro Chambers, in a standout performance), Jack’s sister Nat (Madison Iseman) and her Mohawk-sporting girlfriend Scratch (Paloma Kwiatkowski) set out to rescue him. Nostalgia fans should go for this but parents should note that despite the teen rivalry theme, the violence is cold, plentiful and graphic.