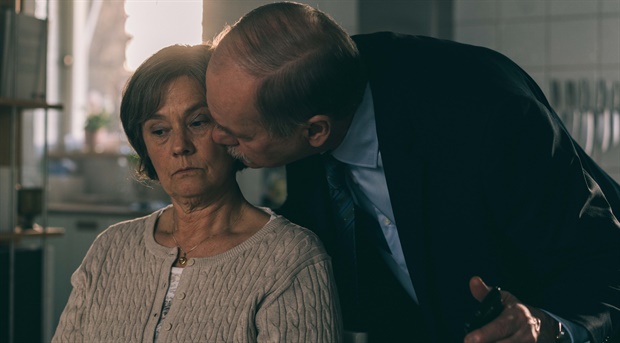 Britt-Marie Was Here has poignant answers to life’s questions

The Swedish film Britt-Marie Was Here begins with the title character asking, “How do you live a life?” As deeply philosophical as this sounds, her answer is an amusing, disarming exploration. For Britt-Marie, a sixty-three-year old housewife, discovers her husband Kent’s long-term affair—at his hospital bed after he had a heart attack.

Blindsided by this confrontation, Britt-Marie packs up and leaves. Ageism and her last job as a waitress forty years ago make her options next to zero. Totally unqualified, Britt-Marie takes a job in the small Swedish town Borg as a youth worker coaching football, our soccer, about which she knows nothing besides her husband’s passion for Manchester United. What follows focuses on Britt-Marie’s interaction with the ten-year-olds in her charge, their training for an important Cup game despite their unskilled play, and her reconsidering and redefining herself.

Throughout this process, Britt-Marie reveals her admiration for her sister Ingrid, the dreamer whose dreams were so big they had room for Britt-Marie. Brief flashbacks establish context, early tragic events that shaped Britt-Marie’s obsessively orderly approach to every detail in her life, as well as defining her belief in limited prospects. All of this implicitly invites thoughtful reflection on our own deterministic influences and ways each person does, or doesn’t, fight to escape them, all wrapped in an understated, pleasing presentation, devoid of sensationalistic or unpleasant confrontations.

A great deal of the credit for the film’s success goes to the wonderful Pernilla August as Britt-Marie, as unusual a protagonist as she is welcome. Slightly younger in real life than her character, August gives the mature, confident performance of an experienced actor—no frills, no distracting mannerisms, no fuss, just solid expression of Britt-Marie. The children, a diverse racial group, add a lively, realistic ingredient. (Where are all these wonderful young actors coming from?)

Jonas Alarik’s cinematography creates a subtle atmosphere with subdued interiors and bright exteriors. Above all, director Tuva Novotny trusts her story, adapted from Fredrik’s Backman’s 2014 novel. Britt-Marie Was Here isn’t afraid to grapple with important life issues in an entertaining package. In Swedish with English subtitles.