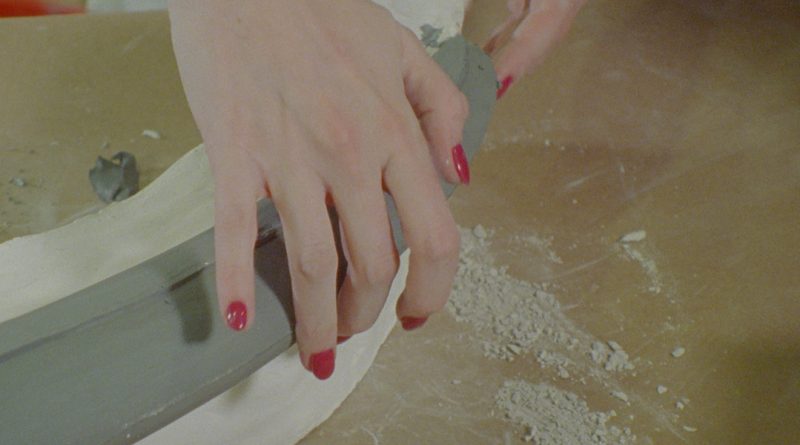 The achievements of award-winning Argentine-British filmmaker and artist Jessica Sarah Rinland make her a perfect fit for the Toronto International Film Festival’s experimental strand, Wavelengths. This year, her fascinating documentary Those That, at a Distance, Resemble Each Other explored questions about the relationship between original and imitation, and how this relates in both practical and conceptual terms to the field of museum conservation and beyond.

Working across Brazil, the United States and the United Kingdom, Rinland provides an intimate snapshot of the ingrained knowledge and appreciation of these questions that museum conservators bring to their craft. Although the film follows the replication of a variety of artefacts, the central work is the creation of an identical replica of an antique elephant tusk, which itself becomes as much of a character as any of the humans we see glimpses of in the film; watching the process from beginning to end, it is framed very much as a narrative journey as much as a conceptual exploration of Rinland’s core areas of interest.

Cleverly incorporating ideas of mimicry and imitation into her own role, the orthodox relationship between human subjects and filmmaker are deliberately collapsed as Rinland herself is filmed doing the bulk of the labor required to make the replica, shown almost completely in close-ups of her busy, working hands. It is Rinland’s hands (characterized by a taste for brightly colored painted fingernails) that become our point of identification in the film as much on a haptic level as she brushes, paints and glues as it is through her narration.

Traveling the world – from Museo de Aqquelogia e Etnologia in São Paulo to the British Museum (amongst many other locations) – the film begins in a far less institutional context, as voice-overs discuss the reproduction of animals as we see the creatures in tight close-up. As she moves towards the introduction of her central elephant tusk and its synthetic doppelgänger-to-be, Rinland presents a series of equally intimate black-and-white photographs of elephants, highlighting the intelligence in their eyes and the texture of their skin, shrewdly introducing the core themes of what will follow: what we identify as ‘elephant’ is in fact not an elephant at all, but, in the spirit of René Magritte’s 1929 painting La Trahison des images, a representation of an elephant.

Rather than adhering to the orthodox hierarchy that values original over reproduction, Rinland dives deep into both the theoretical questions at the core of her film and – quite literally – into the very materiality of the task of replication itself. Through this, we feel the magic of artistic creation as we are immersed through her camera (and through her hands) into the work-in-progress itself. While the final product in the film is the completed replica of the tusk (one so authentic-looking that a special colored seed only visible in an x-ray has to be inserted so they can distinguish the original from the replica), the lingering experience of the movie itself is equally meaningful.

While we as the film’s audience did not participate literally in the actions we witness up-close in Those That, at a Distance, Resemble Each Other, what lingers after viewing is a physical sense memory as an intellectual one. The sensation of cutting through soft sponge, of stuffing cotton wool into a bag, of scraping hard tools across hard, chalky surfaces, of picking clay out from underneath our fingernails; that we did not actually do these things but were so intimately involved in witnessing them effectively underscores Rinland’s broader point, undermining the traditional dominance of that deemed ‘real’ or ‘true’ over its supposedly lesser alternatives.