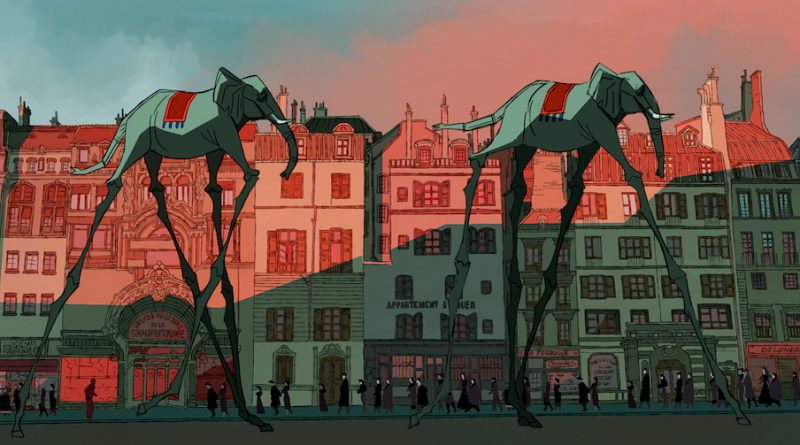 Undoubtedly one of the most singular cinematic experiences of the year, “Bunuel in the Labyrinth of the Turtles” is a hand-drawn animated feature that tells the dramatized making-of story behind surrealist filmmaker Luis Bunuel’s controversial, genre-defying 1933 short documentary “Las Hurdes: Tierra Sin Pan.”

Although it starts out with a fervent debate about art as a social and political change agent, it’s not necessary to know anything about surrealism, Bunuel’s influential work or 20th-century Spanish politics to appreciate the underlying coming-of-age story of a privileged young man learning to value the human lives around him, whether they happen to be loyal friends or impoverished orphans.

In Spanish and French with English subtitles, the animated film opens in 1930 as the Spanish-born Bunuel’s (voiced by Jorge Uson) surrealist short film “L’age d’or” premieres in Paris. It causes such a scandal due to its graphic anti-Catholic imagery that the filmmaker takes to warning people who approach him that he is packing a pistol. Between his latest project’s infamy and his falling out with his fellow surrealist artist and former collaborator Salvador Dali, Bunuel is unable to secure financing for any more films.

Inspired by a book given to him by French photographer Eli Lotar (Cyril Corral), Bunuel wants to make a documentary about the isolated and impoverished Las Hurdes region of Spain. His friend Ramon Acin (Fernando Ramos), an anarchist poet, is so taken with the idea of shedding light on the plight of the poor villagers that he buys a lottery ticket and vows if he wins to use the proceeds to fund the project.

Surreally, Ramon actually wins and keeps his word, rounding up Bunuel, Lotar and journalist Pierre Unik (Luis Enrique de Tomas) and heading for Las Hurdes, where the destitute, inbred population suffers from lack of food, medicine and hygiene. Bunuel immediately blows a quarter of the budget on a flashy yellow roadster that he speeds recklessly along the mountainous passes. To Ramon’s consternation, the self-centered provocateur seems far more concerned about restoring his career than he is helping the poor mountain people, whom Bunuel doesn’t mind exploiting for his ends.

Adapted from the graphic novel by Fermin Solis, writer-director Salvador Simo and co-writer Eligio R. Montero’s captivating story is loosely based on true events, but that seems only fair given the questionable tactics Bunuel used to capture “reality” on “Las Hurdes,” including shooting a goat to get footage of it falling down a mountain and arranging for a donkey to be stung to death by bees to recreate a local legend.

Taking its title from the crude, shell-like roofs on the villagers’ huts, the animated film alternates between the story’s reality and the scary, surreal dreams of stilt-walking elephants and chicken-filled giraffes that haunt Bunuel. The simple beauty of the hand-drawn making-of film also is effectively interspersed with actual clips from “Las Hurdes,” which was given the English title “Land Without Bread.”

Recommended for adult audiences, “Bunuel in the Labyrinth of the Turtles” serves as a striking reminder of the potential of old-school animation to bring to life even the strangest stories.