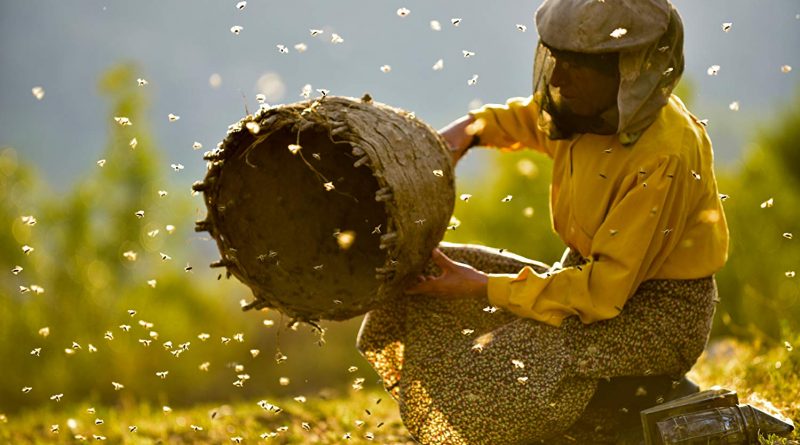 More a rich metaphor than a full-bodied story, Honeyland hangs by a thread on Hatidze. She collects wild honey in a remote mountainous part of Northern Macedonia, though it’s difficult to learn even this given the absence of details. Fascinating and frustrating, Honeyland raises numerous questions for which it provides few, if any, answers.

From a reported four hundred hours of footage edited down to 87-minutes, directors Tamara Kotevska and Ljubomir Stefanov present Hatidze living in a stone hut, tending to her infirm, 85 year-old mother Natife, blind in one eye. The most touching moments are the quiet interactions between Hatidze and her mother, during which a few revelations regarding their earlier situation emerge, quite sketchy.

Most striking, Hatidze trudges across empty expanses, climbs up precipitous ledges to tend beehives and gather honey, and travels to a busy town market in the capital city of Skopje to sell her exceptional offerings. Soon the Sam family pulling a trailer arrives with their cattle herd, plus several bee hives. The family’s father Hussein plunders too much honey, pressured by a greedy outsider wanting a money windfall. Conflict escalates with Hatidze, though she’s warned Hussein that hive collapse will follow such environmentally unsound practices.

The setting is as barren as the explanation of what is going on, where the nomadic family comes from, and how Hatidze manages ever to survive in this hostile ecosystem. However, it’s clear this is not the film’s concern. Instead, cinematographers Fejmi Daut and Samir Ljuma prefer to wordlessly capture Hatidze’s world strikingly devoid of any modern conveniences. Even one lone radio looks lost and plays haltingly only once. No, Honeyland is allegory for the exploitation of natural riches and sensitive labor that takes only half of the honey so the bees will continue to thrive and produce.

Among other nominations and awards, Honeyland won three at Sundance: the World Cinema Documentary Grand Jury Prize, one for its cinematography, and a Special Jury Award for Impact and Change. In Turkish with English subtitles.

EDITOR’S NOTE: Honeyland is AWFJ’s Movie of the Week for August 2, 2019