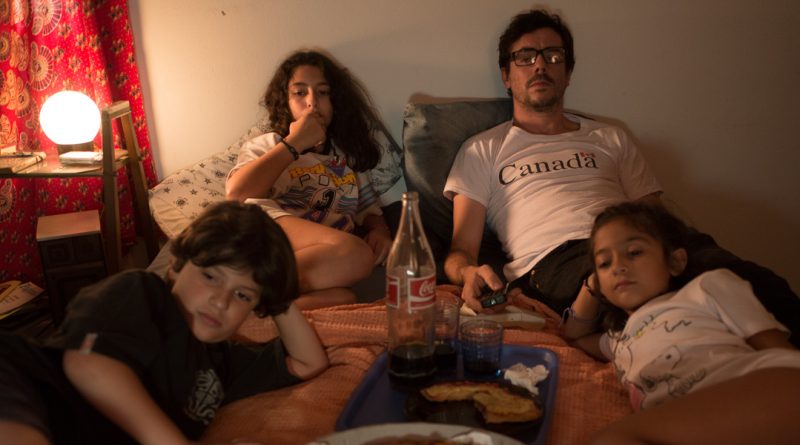 Filmmaker Ana García Blaya looks to her own childhood for inspiration for this semi-autobiographical family drama defined by its title. The divorced couple at its center—ne’er-do-well, middle-aged punk rocker Gustavo (Javier Drolas) and ex Ceci (Jazmin Stuart)—mean well.

Their relationship is amicable enough, but an economic downturn in Argentina has Ceci and her new husband looking toward greener pastures in Uruguay. The wrinkle: She wants to take their three young children with her, but Gustavo is devoted to them and the eldest, nine-year-old Aman (Amanda Minujín), doesn’t want to go. Make no mistake, this is not a melodrama, but a slice of life that unfolds with enormous affection for its flawed characters.

The Good Intentions further unfurls without a driving narrative; life simply happens. It is the 1990s and Gustavo runs a record store with his pal Néstor (Sebastián Arzeno), though the mixtapes the men make for customers seem to be only things they ever sell. One senses that even in a good economy, the store would just squeak by. Home is chaos, given what little order is has by Aman. And try as he might, Gustavo just can’t seem to get it together, barely getting the kids to school, constantly living down to Ceci’s low expectations. Yet, as he bombs around town in his old beater, the music blaring, the whole family singing along, the two-way street of affection between Gustavo and his kids is manifest.

This is a movie of moments: The kids splashing around a pool while Gustavo and his friends party; Gustavo, running late as usual, frantically trying to make it in time to watch his kids perform at school; and in scene after scene, Aman acting as parent, to her younger siblings, and to Gustavo. Blaya has created a film heavy in atmosphere, the world she creates is practically tactile. A thundering punk rock soundtrack further establishes The Good Intentions’ world. But what makes the film truly special is her attention to all the little details that make living, breathing characters, and the performances she elicits from her actors, particularly Drolas and Minujín, pitch-perfect as, respectively, a childish adult and an adult child.

The Good Intentions is Blaya’s debut feature. If her own intention was to create a calling card that announces an enormous talent, she has succeeded.