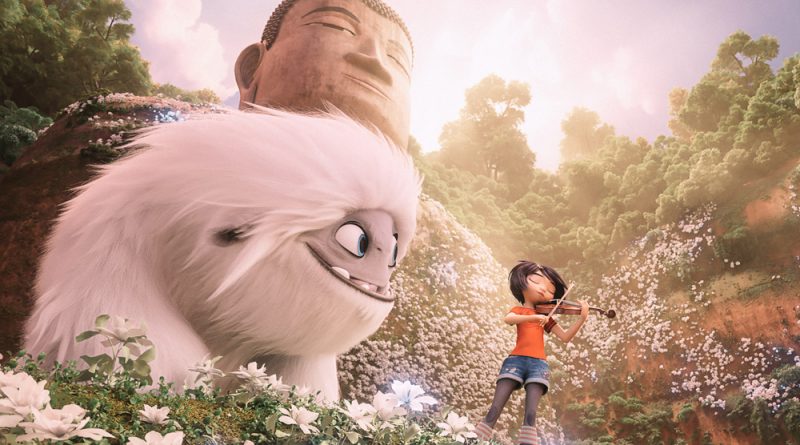 This DreamWorks Animation cross-culture co-production with Shanghai-based Pearl Studio is obviously designed to appeal to family-friendly audiences in the ever-growing Far East market.

In China, a young, white-furred, blue-eyed yeti escapes from the clutches of a billionaire explorer/wild animal collector, Mr. Burnish (voiced Eddie Izzard), and hides on a rooftop where he recognizes a billboard advertising trips to Mt. Everest.

He’s discovered by teenage Yi (voiced by Chloe Bennet), a scrappy tomboy/violin prodigy who yearns to travel and uses the rooftop as her hideaway. She lives in an apartment below with her strict, widowed mother (voiced by Michelle Wong) and feisty, dumpling-making grandmother (voiced by Tsai Chin).

Soon, Yi and two pals – nerdy basketball-enthusiast Peng (voiced by Albert Tsai) and appearance-obsessed, med-school cousin Jin (voiced by Tenzing Norgay Trainor, whose real-life Sherpa grandfather guided Sir Edmund Hillary up Mt. Everest) – embark on a mission to return the yeti, whom they call ‘Everest,’ to his family and rightful home in the Himalayas.

Traveling from the streets of Shanghai across the Gobi Desert to Sichuan’s Leshan Giant Buddha (233-ft. tall carved in a cliffside during the Tang dynasty), they’re doggedly pursued by Dr. Zara (voiced by Sarah Paulson), a British zoologist working for entrepreneurial Burnish, who is determined to prove that the yeti is not a mythical beast.

Along the way, Everest demonstrates some surprising, nature-connected magical powers which he summons with a low, rumbling hum that sounds like Mongolian throat singers.

On the Granger Movie Gauge of 1 to 10, “Abominable” is a serviceable, sweetly simplistic 6, introducing a fuzzy friend that’s adorable, not abominable