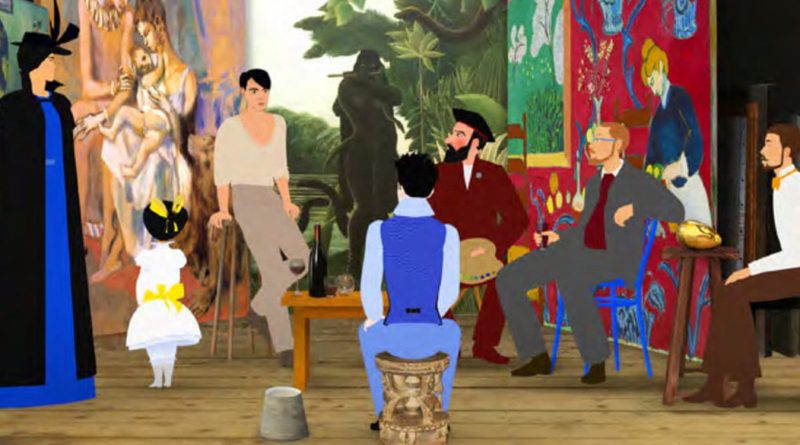 Dilili in Paris celebrates the beauty and much of the best of the Belle Epoque and the city of lights, but renowned director Michel Ocelot’s latest animated feature also examines philosophical and political subjects relating to race, class, gender, and art.

Well-spoken and filled with politesse, Dilili is a New Caledonian mixed-race Kanak child with gumption and fearlessness, and she proves to be something of a Zelig figure. Traversing Paris with her new friend Orel, a delivery boy who oddly looks as if taken straight out of an 80s Patrick Nagel illustration, Dilili encounters a wide spectrum of the famous of the time. From art, there’s Picasso, Valadon, Mucha, Rodin, Claudel and Monet. She also brushes against writer Colette, composers Satie and Debussy, and scientists Curie and Pasteur, just to name a few. Dilili and Orel, with the help of the most famous French opera singer of the time, Emma Calvé (with songs sung by the glorious French soprano Natalie Dessay), come across this list of luminaries while investigating the disappearance of young girls. They are being abducted by members of a cult, with the appropriately misogynistic name, the Male Masters, and these baddies are retraining these children to walk on all fours and, covered head to toe in black tablecloths, become their furniture.

Clearly, under all the glamor and flamboyance is the consideration of a woman’s right to equality and safety, and on display is a societal underbelly where women are going backwards, not forwards, regardless of appearances topside. This, coming from a filmmaker from France, a country for which egalitarianism is meant to be woven into every fabric of its society, but as French women and people of color know often isn’t, is both subversive and welcome.

Even the stilted delivery of questionably translated French offered in the dubbed English language version doesn’t substantially diminish enjoyment of the film, though it sometimes threatens to do so. If viewers can find access to a subtitled version, choose that one, as it is far superior. Why would the distributors believe this arthouse-styled feature should be altered from the original? To fans of foreign indies, subtitles are par for the course. In any events, the film is anchored in enough visual delights that they will thrill anyone who knows Paris well, and entice those curious about the famed city, who have never visited, to see it for themselves.

Though Dilili in Paris won 2019’s Cesar Award (the French equivalent of an Academy Award) for best animated film, It isn’t entirely surprising that Dilili would be received less favorably by US animation fans. Americans are used to less esoteric or experimental animation styles. You may ask who the hell this Michel Ocelot gentleman is, and though not well known in the rest of the film world, Ocelot is a towering figure in the French, and, indeed, in the international animation community, and is a past president of the Association International du Film D’animation (ASIFA). He has been working in the field since the mid-70s, and recently won the lifetime achievement award at the World Festival of Animated Film in Zagreb. He is known for playing with and expanding animation styles, having worked in mixed silhouette, digital, mixed live action and animation, and computer animation.

In Dilili in Paris, Ocelot uses edited photographs he himself has taken over the years to represent a less populated version of Belle Epoque Paris, and he places against them his hyper-colorized flat 3D images of the characters. This gives the sense of the struggle of the new against the old, which parallels the story of the Male Masters attempting to keep women from reaching beyond subservience in society. It is both an old story, and one that we must continue to tell, especially given the misogyny continuing to run rampant in the US and abroad.

As a French-American, I beg you to watch the difference between the trailer of the film in French vs. the dubbed English version: