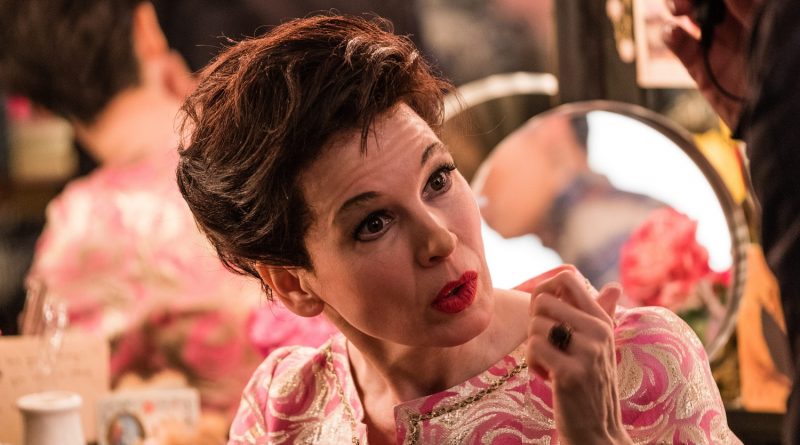 An empathetic and engrossing portrait of the latter days of Judy Garland, “Judy” powers past narrative pitfalls on the sheer might of Renee Zellweger’s fearless embodiment of the ill-fated icon.

Set in 1968 – about six months before Garland’s June 22, 1969, death from an accidental drug overdose – screenwriter Tom Edge’s adaptation of Peter Quilter’s play “End of the Rainbow” finds the superstar essentially homeless, broke and unemployable, towing her two younger children, Lorna (Bella Ramsey) and Joey (Lewin Lloyd), to low-paying gigs and high-class hotels. (Her older daughter Liza Minnelli, played by Gemma-Leah Devereux, appears briefly but is grown and working on her own career by this point.)

Judy obviously adores her kids and yearns to be a good mother. But when she’s tossed from their latest swanky Los Angeles hotel for unpaid bills, the performer is forced to turn the youngsters over to her unsympathetic ex-husband, Sid Luft (Rufus Sewell), giving him the upper hand in their custody battle.

Desperate for money to get her children back, Judy reluctantly accepts British showman Bernard Delfont’s (an underused Michael Gambon) invitation to perform a limited concert engagement at his ritzy London theater. Acutely aware of Garland’s reputation for being “difficult,” the impresario assigns an efficient assistant, Rosalyn Wilder (Jessie Buckley), the unenviable task of wrangling Judy.

Flashbacks to her adolescence at MGM Studios make it clear that show biz broke Garland early and often: The teenage Judy (the terrific Darci Shaw) is force-fed uppers to suppress her appetite and keep her working 18-hour days, denied sleep and meals for long stretches and deprived of any privacy or personal time. Her attempts to buck the system lead to soft-spoken spates of verbal abuse from intimidating studio head Louis B. Mayer (Richard Cordery, low-key terrifying).

Zellweger, who has been chipped and dinged by the entertainment industry a few times herself, embodies all of it – the pill popping, the nervy tics, the sleepless nights, the anorexic eating habits, the prickly impatience, the crippling insecurities, the alcoholism, the loneliness, the desperation to be loved – without becoming a lurid caricature.

The Oscar winner offsets Judy’s addictions, flaws and stage disasters with a fierce love for her children, a sharp self-deprecating humor and an irresistible charisma that makes her fully human – until her Judy flips the switch for an “on” performance, and then the result is almost superhuman. Although she can’t measure up to Garland in her prime, Zellweger is dynamite on classics like “By Myself,” “Come Rain or Come Shine” and “The Trolley Song,” delivering electric, wide-eyed performances showcasing Garland’s undeniable talent.

But it’s Zellweger’s tour de force portrayal that makes “Judy” a success, although Garland’s reality can’t help but make it a bittersweet one.