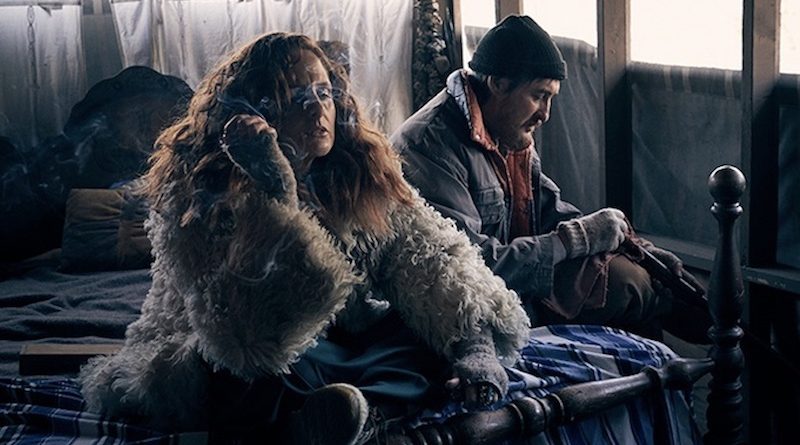 For the second year running, Oklahoma’s Mickey Reece – the so-called “Soderbergh of the Sticks” – has blasted audiences at Austin’s Fantastic Fest well and truly out of their seats with his extraordinary and wholly unique tales of the sophisticated emotional lives of older women and the people (family, lovers) who surround them.

While last year’s micro-budget Strike, Dear Mistress, and Cure His Heart was an ecstatic melodrama that loosely reimagined Ingmar Bergman’s Autumn Sonata, 2019 showed us what Reece can do with a much bigger budget as he and his team unleashed the world premiere of Climate of the Hunter.

While these are the first of Reece’s films to start receiving the critical and audience attention his glorious and unapologetically original cinematic visions deserve, to imply he is a newcomer straight-out factually incorrect. With this, his 27th feature (yes, you read correctly), Reece single-handedly defines “for the love of it” filmmaking. There is clearly a story here that is only just now beginning to be told, but that dedication, that perseverance and – most of all – that driving love of cinema itself can be felt in every single frame of both Climate of the Hunter and Strike, Dear Mistress, and Cure His Heart.

It is therefore perhaps difficult to resist framing Reece’s accomplishments as a filmmaker through this ‘little engine that could’ metaphor, but this risks eliding that which remains so fundamental to his story: as these two films alone indicate, he is quite simply an astoundingly great filmmaker. Following two sisters Alma (Ginger Gilmartin) and Elizabeth (Mary Buss) who reunite at an isolated family cabin, they are soon joined by an old friend Wesley (Ben Hall) who has returned from Paris and has struggled with the emotional and practical difficulties resultant of his beloved wife’s severe illness.

Living a seemingly peaceful life with her philosopher dog and a local stoner who provides her with the little social contact she receives, we are told from the film’s opening moments that Alma’s life is about to take a dramatic turn. The events leading up to this are triggered by the arrival of the urbane, uptight Elizabeth, with the subsequent arrival of Alma’s daughter and Wesley’s son – not to mention the fact that Wesley also appears to be a vampire – only compounding things even further.

As this brief overview suggests, there is a spirit of delight in Reece’s dramatic set-ups, but the energy of the film (like Strike, Dear Mistress before it) stems from a combination of what are effectively his two superpowers. Firstly, Reece is simply a very gifted filmmaker. He understands lenses, light, sound, blocking, art direction, and how even the smallest element can add great depth. In Reece’s films, nothing feels left to chance; there’s an attention to detail that hearkens back to the painstaking, almost ritualistic nuance of directors who can easily be considered his direct ancestors (not just Bergman, but Sirk, Hitchcock, and Lang, to suggest but a few).

Yet it is another filmmaker whose legacy can be felt in Reece’s work – Climate of the Hunter particularly – on a more indirect level; Curtis Harrington, which leads to the second component that renders Reece’s films so striking. With a background in experimental filmmaking, Harrington’s love of genre lead him to some of the wildest so-called “psychobiddy” films of the 60s and 70s; Games with Simone Signoret, and What’s the Matter with Helen? and Whoever Slew Auntie Roo?, both starring Shelley Winters. Exploitative labels like “psychobiddy” however miss the point of what was so important (and so exciting) about Harrington’s work in this category; he embraced working with older women that the rest of the film industry broadly considered past their use-by date. He loved giving these women rich roles, and he loved collaborating with them, and while the politics of these films for some might not quite hit the mark, there is no denying their sense of glee and that everyone involved is clearly relishing the experience of making such emotionally amplified cinema.

Reece is working on a very different tonal level than Harrington of course, but in both Strike, Dear Mistress and Climate of the Hunter he too demonstrates a fundamental love of telling the stories of older women in ways that are both compelling and electrifying; Reece loves his complex, sometimes difficult and always fascinating women, and we love him for it.

Without ever becoming hollow retro pastiche, the foundations of Reece’s work are built upon what is clearly a strong and diverse film literacy, with a fondness for the femme-centred psychodramas of the 1970s in particular. Climate of the Hunter never sacrifices its smarts for fun (or vice versa), but with its dazzling visuals and hypnotic descent downwards into a seemingly inevitable chaos, the film’s delights are ultimately as sensorial as they are intellectual.