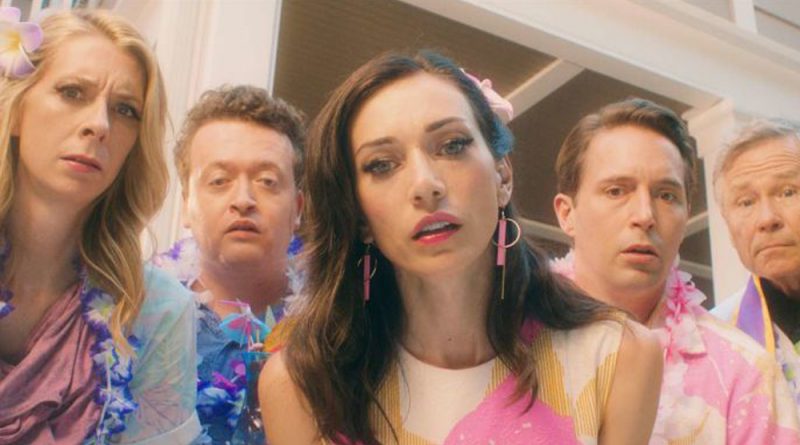 Funny thing about the word “funny.” Sometime it means “ha ha.” Sometimes it means “strange.” And sometimes, as in Greener Grass, it means both.

This deadpan, absurdist black comedy could be titled The Surreal Housewives of Stepford.

Based on a 2015 short of the same name, Greener Grass earned raves — and less rapturous responses — following its 2019 Sundance Film Festival debut.

It’s easy to understand the contrasting reactions. After all, comedy is nothing if not subjective, and this one seems designed — and determined — to provoke laughter with a relentless barrage of random zaniness.

Written, directed by and starring the tag team of Jocelyn DeBoer and Dawn Luebbe (alums of the Upright Citizens Brigade improv comedy troupe) Greener Grass whisks us to a placid suburban Never-Never Land.

But perhaps these families aren’t quite so perfect. For example, all the adults have braces on their teeth, adding a metallic gleam to their requisite perpetual smiles.

It’s the kind of place where a wannabe mom stuffs a soccer ball under her skirt and announces she’s expecting. A place where a father (proudly addicted to drinking his oxygenated swimming-pool water) develops a loving bond with his new puppy — but not with his imaginative son. A place where a chirpy teacher leads her second-graders in a sing-along inspired by her family’s murderous past. And let’s not forget the suspected serial killer on the loose.

Clearly, Greener Grass is not an ideal destination for those who value tight plotting and multi-layered characters along with wacky action.

The movie resembles a series of loosely knit skits, very few of which strike their targets at full force. Yet whenever Greener Grass takes a stab at interweaving its scattershot plot elements, it loses whatever comedic momentum it manages to generate.

Yet much of the movie’s comedic impact belongs to director of photography Lowell A. Meyer, production designer Leigh Poindexter and costume designer Lauren Oppelt.

Together, they conjure a gleefully demented setting — one that deserves a keener edge than Greener Grass ever displays.

It boasts plenty of “funny strange” — but could definitely use a lot more “funny ha ha.”