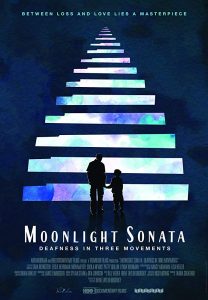 A 2019 Sundance Film Festival selection, Moonlight Sonata is essentially the sequel to Brodsky’s 2007 Sundance Audience Award-winning film Hear and Now, which chronicled the decision by her parents, Paul and Sally Taylor, to get cochlear implants at age 65 after living their entire lives with deafness.

But it’s not necessary to see the Peabody Award-winning 2007 documentary to follow her new cinematic memoir.

Jennifer Merin: Please tell us what Moonlight Sonata: Deafness in Three Movements is about.

Irene Taylor Brodsky: Moonlight Sonata is a film about the generations of deaf people: my deaf son growing up, his deaf grandparents growing older and, a century before them, Beethoven — a composer who wrote his iconic Moonlight Sonata as he went deaf. The narrative is a family drama centered around my son learning to play Beethoven’s sonata on the piano, just as his grandfather begins to descend into the early stages of Alzheimer’s. Beethoven’s own loss — his hearing — is depicted through animation and he serves as the film’s poetic muse. Their lives interweave to tell a story of family, deafness and the beauty that we might find on the other side of loss.

In many ways this film a sequel to Hear and Now (2007), my first documentary memoir about my deaf parents, and their journey together into the world of sound at the age of 65.

Brodsky: This film is told in the first-person, a risky endeavor that’s hard to pull off without being overindulgent, preachy or naval-gazing. For the first half of my edit, I attempted to tell our story without my voice in it. But ultimately I decided my film needed a trusted guide, and that the guide had to be me. I was both the daughter and the mother of the deaf subjects of the film. I also had my own musical awakening, as I came to understand Beethoven’s music — and how his deafness informed it — in a way that I felt uniquely positioned to explore.

Animation is certainly not new to the documentary form, but the animated illustrations we use throughout the film’s narrative to depict Beethoven’s inner life is the glue that holds the film together. The animation is not so much narrative-driven as it is a tonal tool and a reflection point for certain scenes.

Merin: Why did you commit to the subject and theme of your very personal film and the main characters in it?

Brodsky: I didn’t have to look far for my subjects. They are my own family. I encountered Beethoven first through his music and then, as I read his letters and books about him, I realized his journey into deafness was something I recognized in my own family. When my son turned 11, he decided he wanted to learn this piece of music. He had no idea Beethoven was deaf, nor that he wrote in a post-suicidal state. For Beethoven, the loss of his hearing forced him into new artistic terrain.

I committed to tell the story initially about a deaf boy learning a famous piece of music written by a composer as he himself went deaf. But then when my dad started to get sick, I saw an opportunity to incorporate his own loss into a broader film about the discoveries we might find if we can push beyond loss.

Merin: What did you learn about your subject and theme from making Moonlight Sonata?

Brodsky: All of my characters, literally and figuratively, find their voice in this story. A deaf kid learns he can turn off sound (with his cochlear implant) and discover a new way to experience, and express, music. His deaf grandparents, born 70 years earlier, spent painstaking years learning how to speak — how to talk in a voice that the rest of the world could understand. Their voices are a metaphor for life, how they lived it imperfectly but with great intent and a desire to connect with others. And finally, Beethoven became more acquainted with his own “deaf” voice as a musician. That voice created music that is unmistakably his; it is music he created not in spite of his deafness, but because of it.

Merin: What did you learn about filmmaking from making Moonlight Sonata?

Brodsky: First-person filmmaking is probably not something you should do more than once every ten years. It’s so self-reflexive; it needs time to germinate. We still have a ton of footage leftover — footage that could be a part of the next story. I have done this twice now; I tell my boys it may be up to them to make the next one.

Merin: What were your biggest challenges in making the film?

Brodsky: Because I had so much access to the everyday lives of my subjects who lived — literally — in my house, it was hard to know when to stop filming. I know every filmmaker grapples with this, but when you have a light set up in your living room at all times, and run and gun camera kit sitting on top of the piano ready to go at a moment’s notice, it is seductive to shoot everything. But of course, no filmmaker, and no subject can tolerate that. So I had to read the room — read my characters’ mood and my own — before picking up the camera. Often I would start and within 10 minutes my efforts would dead-end. That’s just life.

Merin: Do you think that being female gave you a distinct perspective and/or way of handling the filmmaking process?

It wasn’t so much being a female, it was my perspective as a daughter, and a mother, that makes this film distinct. I am the daughter of deaf parents and I watched how deafness disabled their opportunities, how it could emasculate my father and cut off my mother from a social world she was determined to participate in. But as I grew into a woman, and then had a deaf child, I came to appreciate all the profoundly admirable human qualities their deafness gave them. As a mother, I want to ensure my son can learn those qualities…like clear communication, of looking someone in the eye when you talk with them, of grace in the face of discrimination. I also wanted him to learn from his grandparents the value of turning inwards into his deafness, of going native into his natural deaf state, by turning “off” sound in his cochlear implant. My voice in the film is to be your guide, not only as a filmmaker with the editorial choices I make, but also speak candidly as a mother and daughter. As someone who has been deeply affected by the deaf experience.

Merin: What are your plans for the future?

Brodsky: I’m developing a new film with main characters who do not speak. Mysterious, I know, but that’s all I can say at this point.

Merin: Who are the Filmmakers whose work has inspired/influenced your own?

Brodsky: For Moonlight Sonata in particular, stylistically I was drawn to a Norwegian documentarian named Aslaug Holm. She made a film about her sons over the course of their childhood called Brothers. It is such a lyrical portrait of boyhood, and she offers us just the right amount of narration — her voice served as a sort of Japanese koan, coloring a particular scene, or the passage of time. The film also had a narrative quality to it — so elegantly shot and dreamy. Secondly, I admired the way Roger Ross William revealed his autistic character in Life, Animated. Portraying someone who is disabled by their own body (or their mind) is a delicate endeavor. He never pitied but revealed the powerlessness that disability can bring. He managed to portray the humour, the matter of factness and, always, dignity. His use of music and animation as a tool to enter into his character’s mind and his fears really moved me. I ended up tracking down his composer, Dylan Stark, to work with me on our film.

Merin: What advice do you have for other female Filmmakers who are trying to make their way through a still male-dominated industry?

Brodsky: Making a film about Beethoven this time reaffirmed the value of really going inside yourself as an artist, shutting out other voices so you can better hear your own. Of course, Beethoven didn’t have a choice about going deaf, but I do think we can all hear the beauty and complexity of the voice he developed over time — as painful and disorienting as it may have been. As I mature as a filmmaker, as a daughter, a mother, a friend I now really look for that voice inside myself — not just a literal one, but a refinement of my intuition. A signature way to drive the narrative of my films — and narrative of my life — that is uniquely mine.