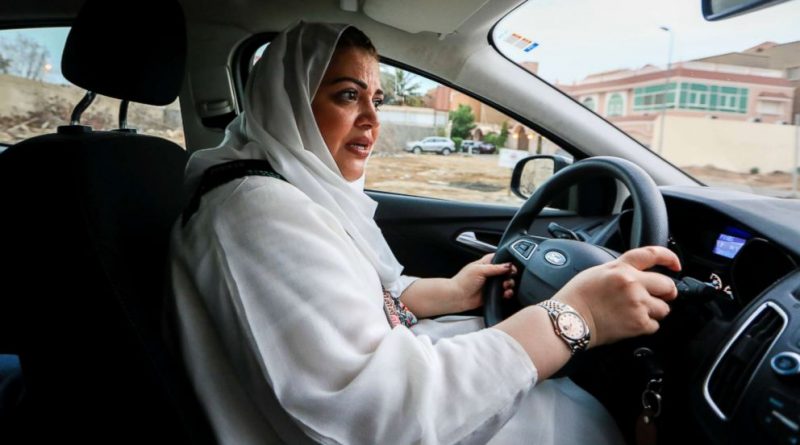 Releasing through HBO, director Erica Gornall’s new documentary Saudi Women’s Driving School examines the changes in the lives of women in Saudi Arabia resulting from a lift of the driving ban. As of June 24th, 2018, women could apply for licenses. Before that day, the country had been the only one in the world in which women were forbidden to drive motor vehicles. The pronouncement came down from King Salman bin Abdulaziz Al Saud and the Crown Prince Mohammed bin Salman, as is the case for all social, economic, and political change. For their movie, Gornall and her team were given rare and unprecedented access by the government to film in and around the capital city of Riyadh.

As a result, we are privy to some great conversations and opinions by women who are immediately affected by the change. Sarah Saleh has been working behind the scenes in the retail car sales industry for years, but is put on the sales floor shortly after the ban is lifted. She immediately signs up for lessons, and the viewers get to see her successfully learn how to drive. Shahad, an Uber driver, kindly but straightforwardly engages her male customers in conversation about their thoughts on women’s rights. All these men are experiencing being driven by a woman for the first time. She is a great representation of the more open-minded members of Saudi society. Her father helped her drive illegally for the first time when she was in the 4th grade, taking her to the desert for practice. She believes her dad, who has since passed away, would be proud of her, and approve of her new job. When one man, who clearly isn’t as pleased with the way rules for women are going, calls her a feminist, she says, “There’s at least a little bit of feminism in every girl.” Later, audiences get the pleasure of seeing her sitting out in the desert, where many women learned to drive before the ban lifted, having a quiet picnic alone. It’s clear she feels far freer than she has ever felt before. There’s also footage of a female race car driver who has always dreamed of being at the top of the sport talking about her goals. We see her take to the track. It’s clear she now has an actual chance at making her dreams happen.

The film also shows a lot of men aren’t as enthusiastic with the changes, including a voice over from a policeman who says, “I won’t let my wife drive. First of all, I’m jealous. Other people would see her. This is what makes me prevent my wife from doing it.” When interviewed in person about his wife, another husband opines, “I like to compare women to a palm tree we take care of, not to belittle her, because they have great value in Saudi Arabia. If I leave it outside, it’s not the same as keeping it in my house, protected, well-maintained, when it’s outside in the burning sun, exposed to sandstorms, it will wither and die.” Without missing a beat, his wife very calmly responds with, “Things have changed. Wives are more like men now.”

In part, women being able to drive is meant to aid in the expansion of a Saudi post-oil economy. It is thought that working women will be essential to the forward movement of the country. Some argue, however, that the highest financial echelon of Saudi society will see the most positive impact. It is, for example, far more expensive for a woman to learn to drive. Women generally pay the equivalent of between $500-$800, while men only pay $120.

Where this documentary most excels is in showing just how powerful the women of Saudi Arabia are, whether they are married or single, activist, or older widower. Regardless of their circumstances, they find ways to see the positive, bolster each other up, and stay strong. As professor Madawi al-Rasheed, an Arabian scholar explains, that is how they survive the pressures and disadvantages of being women in Saudi society. While the separation of men and women in many sectors of society are softening, there are still severe limitations in place for the female gender, like the guardianship laws still in place, that make all women minors, regardless of age. They require a male guardian’s permission for most travel, marriage, and going to school. Even if abused, they cannot escape without guardian involvement. Director Gornall also gives airtime to a number of activists who had been agitating for change for years. Many were arrested only weeks before the ban lifted, and a number of them are still imprisoned, and by some accounts have been tortured. Dozens still awaiting trial.

Speaking to Erica Gornall, she said she could never make a film in which needed final approval from a foreign government, which explains why they named and showed footage of these women. Perhaps being brought to the attention of a large audience will help alter the trajectory of their situation, which could end very badly. They could also all be released tomorrow. It’s entirely at the discretion of the royal family.

Not included in the film is the response, by the European Organization for Human Rights, to the ban being lifted. They have been quoted as saying, “The ESOHR emphasizes that any selective actions that do not lead to the immediate release of all female human rights activists and advocates and political prisoners and do not hold torturers accountable in public trials cannot be described as reforms, especially since women detainees and victims of repression have been at the forefront of the changes that have taken place.”

All of this is to say that the changes exampled in Saudi Women’s Driving School are a small step in a country where an absolute monarchy makes all the social and economic decisions, in which there are no women represented in government, no criticism will be tolerated, all judges are appointed by the king, and there is no official definition of terrorism. Many believe this change, and Saudi Arabia’s willingness to have a film showing it, is all about optics to control the narrative, and project an image as far as possible from the highly publicized one in which Crown Prince Bin Salman has been implicated in the death of Jamal Khashoggi. According to a United Nations report, destruction of evidence following Khashoggi’s death “could not have taken place without the crown prince’s awareness.”

In a repressive society, baby steps are better than no steps at all. Hopefully, those who watch Saudi Women’s Driving School will be compelled to do more research, and support more positive changes for women in Saudi Arabia, and around the world.