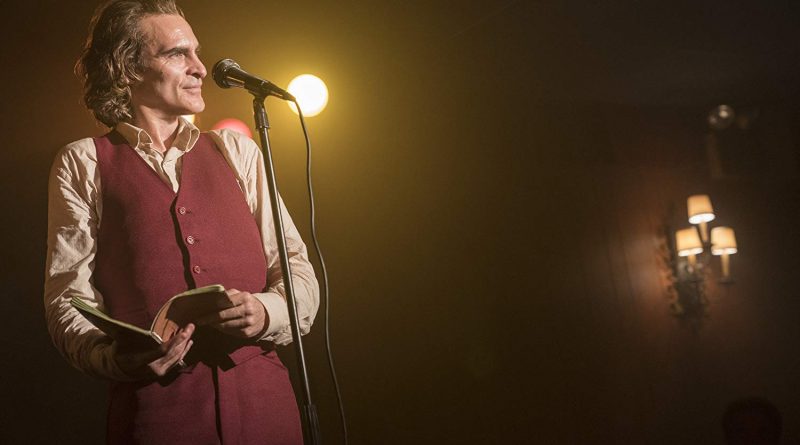 Ostensibly, this is the ultra-bleak origin story of DC Comics’ super-villain and Batman’s arch nemesis, known as the Joker.

Saddled with a long familial history of insanity, which he shares with his deranged mother (Frances Conroy) who tried to burn him alive as a child, troubled, tortured Arthur Fleck (Joaquin Phoenix), who is plagued with uncontrollable laughter, has endured years of social isolation and negligence, falling through the cracks in the mental health system.

Living in her grubby Gotham City apartment, Arthur’s common bond with his mother is avidly watching Murray Franklin (Robert De Niro), a nightly TV talk-show host. As an aspiring stand-up comedian, known as The Joker, clown-faced Arthur eventually lands an appearance on Franklin’s show, seeking attention by bringing a gun on-stage with him.

While Hollywood has a long history with raging psychopaths, anti-heroes and vigilante violence and I firmly believe in freedom of artistic expression, in our current culture, real-life mass shootings have become more and more prevalent.

As of September this year, there have been 283 mass shootings in the United States, nearly all perpetrated by angry young men filled with previously repressed rage, many of whom have posted YouTube manifestos..

“Is it just me, or is it getting crazier out there?” the Joker asks rhetorically near the film’s conclusion.

Directed by Todd Phillips, who co-wrote the uneven, character-study screenplay with Scott Silver, the blood-spewing violence is vividly photographed by Lawrence Sher and ominously orchestrated by Hildur Gudnadottir.

In perhaps the sickest, most subtle twist, a pivotal scene in which Phoenix’s Joker dances down a long flight of steps as he transforms into his sinister alter-ego, features disgraced glam/rocker Gary Glitter’s 1972 song “Rock and Roll Part 2.” Despite Glitter’s 16-year jail sentence in the UK for attacking three girls, this pedophile, whose real name is Paul Gadd, will be raking in the royalties.

On the Granger Movie Gauge of 1 to 10, “Joker” is a brutally nihilistic, morally irresponsible 4, glamorizing and glorifying a nasty, maniacal villain, leaving one to wonder if a reel threat could inspire a real threat.