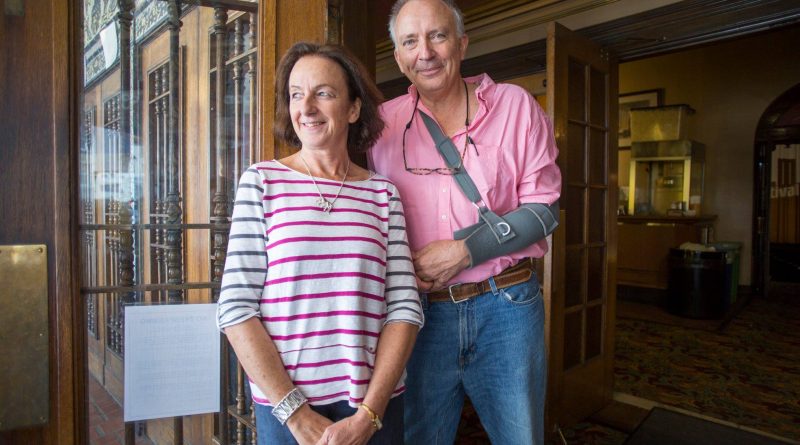 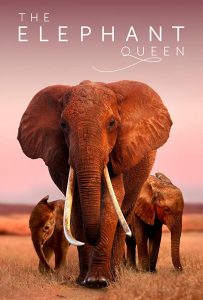 Award-winning wildlife filmmakers Victoria Stone and Mark Deeble’s latest nature documentary, The Elephant Queen, is Apple’s first theatrical release. The married filmmakers have spent more than 30 years living and working in East Africa, and The Elephant Queen is the culmination of a 10-year-dream and four-year labor of love. Stone calls the film an homage to female power and wisdom. It is the story of Athena, a 50-year-old elephant matriarch, and her herd of females and juveniles, who must embark on a perilous journey to seek water after their waterhole dries up. Stone (and Deeble) spoke to Sandie Angulo Chen about the film, its female-empowerment themes, and their hopes for reaching a wide audience who will be motivated to care about and protect endangered elephants.

Sandie Angulo Chen: Explain how the idea for this documentary came to you and how you became interested in making a film centering on elephants.

Victoria Stone: We’ve spent the last 30 years — we’re obviously married — living in the wild in East Africa. We’ve filmed everything from fig wasps to crocodiles, and elephants have always been around us and been part of our lives. It wasn’t until about 10 years ago we thought, “Okay, we really want to tell an elephant story. But we don’t just want to tell an elephant story, we want to make sure it’s about that whole world the elephant lives in. So about the elephants and their neighbors. We knew that that would give us the kind of breadth in the film and the charismatic lead characters with the humor and the detail and also just the reflection of the elephants’ lives, because they’re not on their own.

Chen: I saw a clip of your acceptance speech for the Peabody Award years ago and you used the word “interconnectedness” about the aspect of nature you intend to convey. Is that how you’ve typically approached your nature films?

Stone: Yes. It’s the interconnectivity. It’s the circle of life. And, not to ram anything down anybody’s throat, but we just want to tell stories which reflect that. That’s why we choose to have the smaller cast and the elephants

Deeble: It’s really showing the sort of the wonder of the natural world that inspires us. 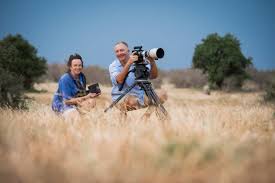 Stone: For 90 minutes you need a very compelling story to take it all the way through. And that was incredibly important to us. And I think that’s where the characters of the elephants and the smaller animals work.

Stone: That’s a fantastic question, because that’s exactly what we have tried to do in the film. And I think it’s by honoring the animals. But at the same time, making it accessible by using humor, using obviously the storyline. But, in our opinion, only doing that to the point that it’s subtle, not overly cutesy. And I think what this film absolutely is not is a documentary about everything you want to know about an elephant. Because the minute when we were writing the script, the minute you put in too much information, you kill a story. So you have to remember you’re telling a story. And our primary objective was to inspire as many people as possible to fall in love with elephants. 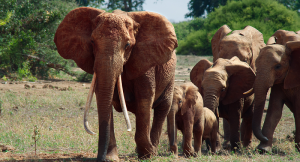 Chen: How did you find Athena? It’s sort of funny because it’s not like you’re casting her in the traditional sense, but you kind of are.

Deeble: In some ways it was like that, because we looked around for a long time. We knew we wanted a small family with a charismatic matriarch with those huge tusks and a couple of children and calves of a very young age in the family. We’d search for 18 months – and we’d been filming other things during that time but we hadn’t found a key family. And then we came back into camp one day, and she was standing with her family in the shade of a tree just behind the kitchen. When she turned her head and we saw those tusks, we knew that we’d found our family.

Chen: She was posing for you.

Stone: She kept coming back each day.

Deeble: We couldn’t really film her at first, but we just followed her for weeks and weeks. And gradually she came to accept us getting closer and closer.

Chen: I thought it was fabulous that even in a nature film, matriarchy and female wisdom is a major theme. And so how is how do you feel that matriarchy in wildlife is something humans can learn from?

Stone: What I liked in The Elephant Queen is Athena’s story and the way she behaves to her family, the way she leads from behind. She lets others find a way, but she’s there to guide. She has to make the decisions. Even though it’s not telling you anything or talking particularly about human female power, I think it allows you to sit there and reflect. It gives you almost a role model in a strange kind of way. And I love the way it’s an homage to grandmothers — to the female line in a family and the importance of all those very quiet decisions and guidance she makes in bringing up a human family — or an elephant family. 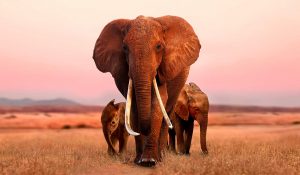 Chen: It was powerful to see how Athena had to make difficult decisions that impacted everyone in her herd.

Stone: If you think about other films in the same genre, a lot of it is “tooth and claw and fight.” It’s about nature “out there,” not about allowing you to just reflect as humans. We tried to infuse the film with all those reflections on how we see the world and to honor and bring to the front the female story.

Deeble: It’s interesting to note that the leader is not the strongest or the youngest female. It is the one who’s longest in the tooth, literally. But it’s also the oldest and the wisest with her accumulated wisdom through decades of experience.

Chen: But you didn’t choose a female narrator – not that I’m complaining, because I love Chiwetel Ejiofor’s voice.

Stone: When we were looking for a narrator, we wondered whether we wanted a female voice. But then we thought that it’s such a female story that maybe the theme would be even more strongly endorsed and received if a man was telling it. Not that I’m saying men endorse things more strongly, just that we wanted a warm voice that could tell you a rich, deep story. We had a top list of five and suddenly realized Chiwetel was actually that voice. He was able to be that calm, rich voice that sort of says “Let me tell you a story around the campfire.”

Chen: So you and your small crew did everything from shoot, edit, write, and cast the narrator?

Stone: We had complete authorship and control. We had actually finished the film and then Apple came along and bought it as their first feature.

Chen: This was not something where you had to ask for a final cut of your film. It’s completely yours, which is rare.

Stone: Ten years ago, we set out to make this we started tiny. It was just the two of us, a camera and a car, and then our assistant director joined us. And then it grew and grew and sort of snowballed into being this team of five or six in the field, which I guess is not a huge snowball. But by the time we left the field, we had other people we’ve worked with before brought on to do the sound mix and other elements. And still, it remained quite a tight core team. But we saw it through literally from conception and raising the first dollar through to taking it to Toronto Film Festival. And then Apple saw it. 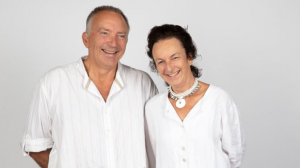 Chen: What has it been like working with Apple?

Stone: This was their first feature and they’ve been so good to us. Our dream for the film has always been to reach the widest possible audience, because it’s a story that can appeal to all human beings rather than just animal lovers. This allows us to reach the widest possible audience and to inspire them to fall in love with elephants. At the same time, we hope to make a difference for elephants on the ground. Because during the making of the film, those four years poaching around us was escalating.

We even had to move camps at one stage because we were sharing waterholes with the poachers. So it was getting very tense. So we questioned whether we should be making a more issue driven film, but actually we felt strongly that we need the world to love the elephants and then people will be inspired to do something.

Chen: Will there be a call-to-action around the film?

Stone: Yes, on The Elephant Queen website, and there will be a lot of sort of social media that Apple does. But there will be then this whole hub where you can go to get further involved, to find out more about elephants, because as I said, it’s not that it’s not full of facts that we’ve done. We just will take you into a richer, deeper world of elephants. And if you want to do something to help and support elephant, right, there will be ways of doing that.

And we’re personally doing a huge educational component both in East Africa and in the U.K. We’ve got 28 “learn to read” books for children about the various animals. We’ve based them around characters in the film. We’re working with Kenyan Institute of Curriculum Development, to put the books in schools in Kenya so that our long term ambition is that every child in Kenya is learning to read based on stories from the film — but more importantly, from the wild. So even kids who live in a city will somehow feel like these animals are their childhood friends and become aware of what’s going on in the natural world.

Chen: And you’re also screening the film in Kenya?

Stone: Yes, because most people in Kenya will not be able to watch it the way you do here. We want to take this film to every child in Kenya. We plan to get it narrated in the two major languages (apart from English) spoken in Kenya.

Chen: One thing that’s important to point out is that you aren’t tourist documentarians. You have lived in East Africa for decades, so it’s not like you flew in and flew out.

Stone: Yes, that is really important to us. We brought up our two children in the Bush.
All the films we’ve done, we’ve donated to Kenyan television, so everyone can eventually see it free of charge. We’ve got a real drive to get it out into local communities and global communities.

Chen: I have to be honest, a lot of people would find it difficult to be so professionally and creatively entwined with their spouse or partner. How do you make it work?

Stone: We’ve just done it since the day we met.

Deeble: We literally spend more time together than any couple we know.

Stone: I think now we might be like the two halves of the same brain. It’s amazing because we are really different. So we both bring completely different sides to it. And it’s been the center of our lives, making these nature films. It’s been what inspires us both equally. And I think the fact that you never have to question whether the other person is as driven to do what you’re doing is amazing. It’s a shared dream.

The Elephant Queen is in theaters on Oct. 18