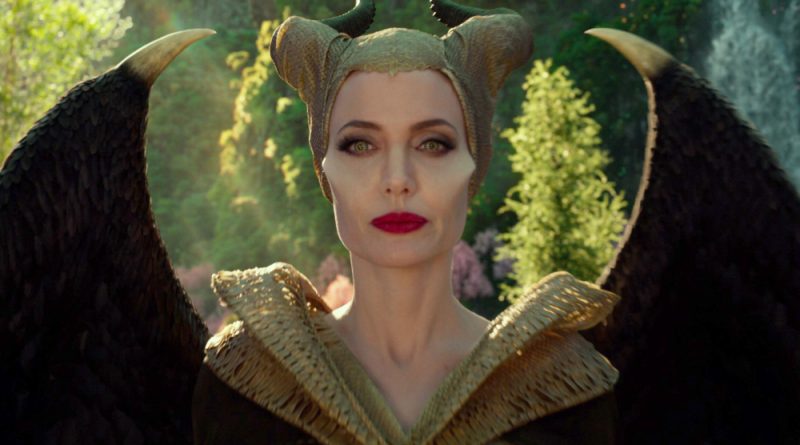 Angelina Jolie shines in the dark and enchanting Disney, fantasy adventure Maleficent: Mistress of Evil. Directed by Joachim Rønning (Pirates of The Caribbean: Dead Men Tell No Tales), from a script by Linda Woolverton, Noah Harpster and Micah Fitzerman-Blue, this follow-up to the 2014 blockbuster Maleficent, is a spirited revenge thriller.

However, this time, the horned fairy (Jolie) discovers she may not be the most evil or powerful one of all and faces her biggest challenge yet.

It all begins with Queen Aurora (Elle Fanning, The Beguiled), aka “Sleeping Beauty.” She’s now the ruler of fairies, pixies (Imelda Staunton, Lesley Manville and Juno Temple) and other odd-looking big and small creatures in “The Moors,” a Skittles colored forest kingdom.

Maleficent has plenty of reasons for not trusting humans. Hooking up with the Moors and the Kingdom of Ulstead has far-reaching implications.

But sometimes you must go along to get along and Maleficent attempts to do just that. Her trusting assistant Diaval, (Sam Riley, Maleficent) even gives her a few lessons on social etiquette which she’ll need for a celebratory dinner at the castle with her future in-laws, Prince Phillip’s parents, King John (Robert Lindsay, TV’s Plebs) and Queen Ingrith (a striking Michelle Pfeiffer, Avengers: Endgame).

Over dinner, Queen Ingrith makes it known she hates Moors and that she’s not on board with the wedding. With all those icy glares being cut between the Queen and Maleficent you know something is about to go down. When the zingers begin to really fly, King John suddenly becomes cursed and Maleficent is blamed for the sudden turn of events.

Maleficent attempts to fly away but is wounded by one of Queen Ingrith’s guards and is presumed dead. She’s later rescued by a few “Dark Fae” leaders (Chiwetel Ejiofor, The Lion King) and Ed Skrein (If Beale Street Could Talk) who have been excommunicated too and have some scores they’d like to settle.

A few additional plot twists keep Maleficent: Mistress of Evil moving at a steady clip. Ultimately, it all leads to a fierce battle between Maleficent and Queen Ingrith.