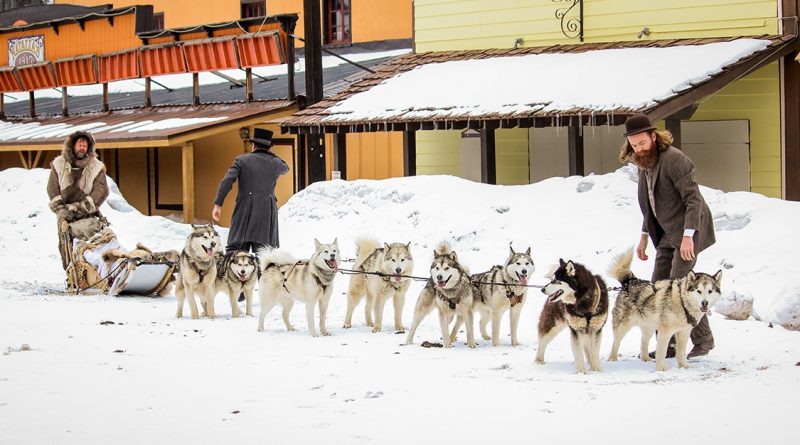 The Great Alaskan Race is a commendable passion project from filmmaker Brian Presley, a film dedicated to the “unsung heroes” who helped save the Alaskan city of Nome from a diphtheria outbreak in the early 20th century. The mushers and dog teams that transported diphtheria vaccine 700 miles from Anchorage to Nome are given the hero treatment here, and they certainly deserve praise—but this movie is so superficially constructed that it’s impossible to feel any empathy for any character onscreen.

Presley focuses his story on musher Leonhard Seppala, who he himself plays in the film. For the first 45 minutes or so, we see Seppala’s life cycle from joy to tragedy—he’s married to a native woman, living off the land in Alaska and forming a bond with the animals who live there. A heralded musher, he has won the Alaskan Sweepstakes Race in the past, but only a few months after his wife gives birth to their daughter, tragedy strikes. His wife mysteriously falls ill and dies, leaving Seppala to raise their daughter alone in a town that is being transformed into a mining operation.

Young Sigrid (Emma Presley) doesn’t remember her mother, and Leonhard doesn’t incorporate much of his wife’s native culture into her upbringing. Instead, the family’s sole quality is their Christian religion—Sigrid loves going to church, begging her father to attend more services—and their selflessness. That is why, when diphtheria hits the town and begins endangering children’s lives—including Sigrid’s—Leonhard volunteers to make the trek from Anchorage to Nome, in temperatures that dip below –80°F, with a team of sled dogs who might die under these conditions.

“Damn you, God. Damn you!” Leonhard proclaims after his wife passes, but he returns to his faith during the journey, which captivates the entire country. Will Nome be saved? Can Leonhard win the “race against death”?

The Great Alaskan Race tries to make a dramatic narrative out of this story, but the film doesn’t provide any depth to either its characters, and without that emotional investment from the viewer, the whole story falls flat. The film begins with voiceover from an unseen native narrator who praises Seppala for his embrace of native culture, but that construct is abandoned midway through the film, and feels particularly disrespectful given how little interest the movie actually has in that way of life. Instead, the movie’s most prevalent theme is Christian faith and its signifiers: crosses marking people’s graves and worn around people’s necks; the Christmas holiday and the church traditions held around it; prayers at people’s bedsides. Instead of building characters’ personalities or motivations, the movie relies on Christianity to tell its story of human sacrifice, and the only time the movie presents native culture and that religion together, it presents Christianity as the more compassionate faith.

“Every day we wait, children are going to die,” someone solemnly says, but for all the characters the movie populates its narrative with—Alaska’s worried governor, newscasters reporting on the story, preachers asking for prayers—it pays very little attention to the sled dogs and teams that actually made this journey. Prevalent overhead scenes are meant to give viewers a sense of place and scope, and although the landscapes are beautiful, they also feel empty without our interest in any of the characters living in them. The Great Alaskan Race wants to educate viewers about an impossible story and the heroes who made it real, but its filmmaking choices keep it thoroughly hollow.