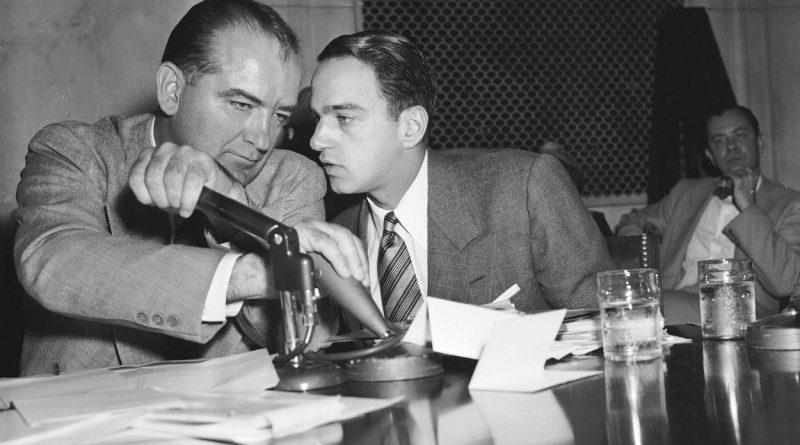 Most people have heard of Roy Cohn. Most people know to link his name with Sen. Joseph McCarthy’s. Most people even know to modify Cohn’s name with “evil” and “mendacious” as well as “arrogant” and “Satanic.” But few know now why those adjectives apply to Donald Trump’s role model.

And for that reason, Where Is My Roy Cohn? is an origin story. It plots the map from McCarthy to Trump with Roy Cohn front and center and tanned. Matt Tyrnauer has created a remarkable documentary about this master of the dark art of law. He starts with Cohn’s mother Dora, said to be ugly, sold off to Al Cohn. The tale of one seder, as told by a nephew in the film, speaks volumes about Mother. She doted on her only son, spoiling him.

Born in the Bronx in 1927, Cohn graduated from Columbia Law School at 20. At 23, he served as co-counsel during the Army/McCarthy hearings and was seen for 36 days on reality television as the McCarthy Whisperer — right up until Joseph Welch railed about decency. Cohn went on to prosecute the Rosenbergs to execution, to draw up the mingy pre-nupt between Ivana and Donald Trump, to defend the Mafia, and to lie like a rug. He was disbarred in 1986. He claimed he was not homosexual, yet had sex with men every day under the mirror on his bedroom ceiling. He denied having AIDS until he died in 1986 — of AIDS.

Tyrnauer interviews Cohn’s colleagues and his cousins, including the writer Anne Roiphe; journalists Marie Brenner, Sam Roberts, and David Cay Johnson; gadflies like Roger Stone. None has anything good to say about the man, describing Cohn as a self-hating Jew and a self-hating homosexual with no respect for the law, only the judge presiding. Also appearing in newsreels is Donald J. Trump, honeying up to Roy Cohn, who has only good things to say about his mentee.

Where Is My Roy Cohn? is an effective, dispiriting documentary about a man who lived with more stuffed animals than ethics. The film glues history then to today. As one interviewee says with a furrowed frown, “Cohn’s impact on politics lives on.”