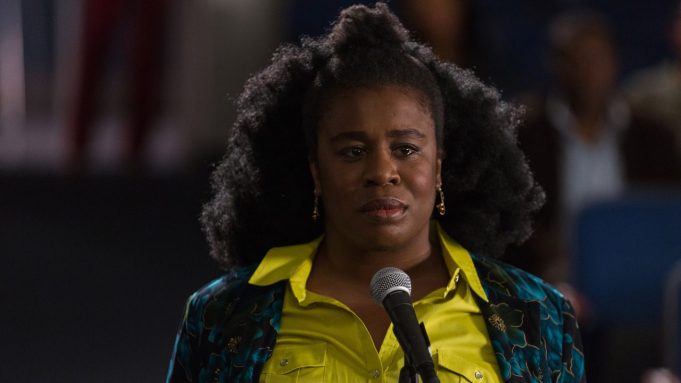 Just because a movie’s based on a true story doesn’t mean it’s entirely truthful.

That’s certainly true of Miss Virginia, a fact-based drama about a single mother who turns community activist to save her son — and, by extension, other sons and daughters — from the mean streets of turn-of-the-millennium Washington, D.C.

A determinedly uplifting tale, Miss Virginia works hard — at least as hard as its title character — to make its case.

In the process, however, the movie not only fudges some facts but presents a largely one-sided view in favor of school choice — and against “failing” public schools.

The movie comes from the Moving Picture Institute, which describes its mission as creating and supporting projects devoted to “human rights and individual freedoms,” along with “governmental waste and corruption.”

OK, at least we know where they’re coming from — and what they’re aiming to achieve.

Set in 2003, Miss Virginia keeps its focus squarely on the title character, who’s brought to energetic life by Orange Is the New Black Emmy-winner Uzo Aduba.

She’s a compelling, courageous presence, embodying Virginia’s quest to find a school that will inspire her artistic 15-year-old son James (Niles Fitch), who’s been cutting class and hanging out with the shady, drug-dealing Bonz (Nadji Jeter).

Virginia thinks she’s found the perfect place for James. Trouble is, it’s a private school and she can’t possibly afford the tuition.

Not even when she takes a second job as a cleaning woman — in the office, conveniently, of Lorraine Townsend (Anjanue Ellis), D.C.’s well-connected Congressional representative

Townsend may be a vocal education advocate, but — as Virginia soon discovers — the representative can’t be bothered with any ideas that challenge her own agenda.

Instead, Virginia finds an unlikely ally in a Congressman from the Midwest (Matthew Modine) who has successfully advanced scholarship programs for underprivileged students back home.

Screenwriter Erin O’Connor keeps Miss Virginia on a path so predictable you’ll be able to anticipate not only when, but how, the obligatory roadblocks will appear.

Fortunately, the movie’s winning cast keeps the movie on track. From the cheerfully sardonic Modine to the tower-of-power Aduba, they remain persuasive — even when Miss Virginia isn’t.