Thoughtful, contemplative, and deeply personal, French artist Prune Nourry’s documentary “Serendipity” is an intimate glimpse inside the mind of a woman coping with the unexpected. Blindsided by a breast cancer diagnosis at age 31, Nourry channels her anger and fear over her health into art, documenting her treatment, her feelings, and the profound changes her body goes through. 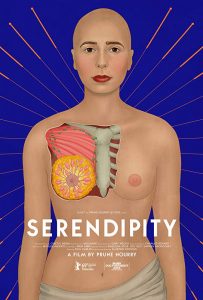 Nourry is no stranger to art that shines a bright light on topics many people might consider private — in 2009, she spearheaded an event/exhibit called Procreative Dinners in which all of the food served was tied to symbols of fertility. She turned a food cart into something quite different with 2011’s Spermbar, and she’s worked on many sculpture projects that explore gender, sex, and identity.

But none of those quite prepared her for the news her doctor gave her in 2016. Faced with serious choices and the knowledge that her treatment would have a significant impact on her body and sense of self, she leaned in and turned her journey into an art project like no other. With the help of doctors, family members, and friends like director Agnes Varda, Nourry documents changes both internal and external as she faces chemo, hair loss, surgery, and more.

The result is sometimes dreamy, sometimes poignant, sometimes challenging; the throughline is Nourry herself, who never loses sight of her calling as an artist or her passion to process life through the art she creates. Because in the end, she says, that’s what matters most — health, love, and art. — Betsy Bozdech

Marilyn Ferdinand: The opening moments of French artist Prune Nourry’s autobiographical documentary Serendipity are disorienting. With nothing but some white linen sheets in the foreground, it takes time for us to realize that we are in a hospital corridor watching through a camera that has been placed on a gurney that eventually will be wheeled into a lab. We don’t know who is on the gurney or what might be happening to that person. In this way, Nourry puts us in her shoes—she’s a young woman who has been broadsided by a diagnosis of breast cancer. Yet, Serendipity actually spends relatively little time on Nourry’s illness. Instead, through the use of documentary footage of her various projects through the years, we get a broad introduction to the brilliance of her art in expressing her sensitive insights into human reproduction and motherhood, women’s rights, and illness—all serendipitously dovetailing with the physical challenges that are confronting her. Nourry, primarily a sculptor, is not an artist I was aware of, but now I can’t wait to see everything she’s done. Among her many impressive and giant-sized works is an astonishing riff on China’s terracotta warriors, using the faces of ordinary Chinese girls to sculpt her “Terracotta Daughters,” a meditation on gender selection under China’s one-child policy. A cameo by Agnès Varda, who films Nourry cutting her own hair prior to losing it to chemotherapy, is a surprising and touching bonus. I can’t recommend this film more highly.

Liz Whittemore As a mother, Serendipity touched parts of me I had almost forgotten about. A woman’s body is oftentimes defined by her environment. She is a vessel for knowledge. She is a sponge for ridicule and praise. She is a bed to rest upon. She is an oven. She is a source of food. She is a magical being. Prune Nourry allows us into each facet of a woman through her art. Documenting her breast cancer treatment mixed with her previous, femme-centric art pieces, we are confronted by the entirety of being a woman. The oftentimes thankless physical and emotional sacrifice that inevitably exists. This film speaks to the judgment, grace, honor, and mystery by which we are perceived by not only the world but in turn how we perceive our own femininity. Serendipity is an immensely thought-provoking and endlessly beautiful documentary that every woman can connect with.

Leslie Combemale Artist and director Prune Nourry considers the intimate and personal in art and how it connects to her journey through diagnosis and treatment of breast cancer in her feature documentary Serendipity. As a visual and multi-media artist, Nourry has had a consistent fascination with creation and destructive forces in humanity, and what it means to be a woman, as examined through fertility, procreation, cultural gender preferences and understandings of gender identity, and perception of the value of women around the world. Viewers are shown aspects of her body of work as an artist, juxtaposed with her experience with breast cancer. Even taken apart from the display of her work, it is an artistic film. The music, as with many aspects of the movie, feels like a meditation. Nourry also leaves space, in long shots of scenes such as her getting chemo, or shaving her head, for audiences to experience it as art, and pointing to the art inherent to all aspect of life. How many women need to be reminded that their expression of womanhood is uniquely personal, and not contingent on the shape or health of their bodies? If there’s even one out there, that give Serendipity its raison d’etre.

Jennifer Merin Serendipity is an autobiographical first feature documentary in which French-born, New York-based artist Prune Nourry expresses her soulful response to her breast cancer diagnosis and follows the subsequent evolution of her body, her work, her spirit and her mind. This impassioned, beautiful, life-affirming feminist film inspires rewarding contemplation about what are, as defined by Nourry, the essentials of life: health, love and art.

Sheila Roberts It seems like a natural artistic progression for Nourry to create a first person documentary that captures her personal experiences and evolution after she learns she has cancer — from her preparation for surgery which features a sparkling cameo by the late Agnes Varda who helps cut her long hair, to freezing eggs harvested from her ovaries to preserve her ability to get pregnant in the future, to her mastectomy, subsequent chemotherapy and reconstructive surgery. Read full review.

Nikki Baughan: Young French artist Prune Nourry explores her relationship with her own body following a breast cancer diagnosis. Looking back on her past works surrounding fertility, and documenting her navigation through her illness, this is an intimate yet powerful piece of filmmaking.

Sandie Angulo Chen: French multimedia artist Prune Nourry’s documentary Serendipity is part artist’s diary, part cancer memoir, and part exploration of the international rights (and plights) of girls and women. Both microscopically intimate (we see Prune shaving her hair, undergoing chemo treatments, readying herself for reconstructive plastic surgery), and globally focused (the film shows how connected she is with her international art projects, which all have to do with gender inequality or women’s struggles – from fertility to cancer — in unique ways. Only 31 when she was diagnosed with breast cancer in 2016, Prune’s treatment schedule doesn’t stop her from continuing her exhibitions and projects, many of which are inspired by legendary works with a contemporary spin (the Terracotta Soldiers turn into Terracotta Daughters as a commentary on gender selection in China, basing each of the “warriors” on orphaned girls; the Marble Statue of a Wounded Amazon transforms into Catharsis, a tribute to all cancer survivors, to name just two of her revelatory pieces). This is no filmed exhibition, however – the documentary is personal and powerful for all (particularly women) who’ve battled, been wounded, and continued on.

Cate Marquis In Serendipity, New York-based, French-born sculptor/video artist Prune Nourry deals with her diagnosis of breast cancer by doing what she does best – turning it into art. With the help of the late legendary filmmaker Agnes Varda in one scene, Nourry prepares for surgery and goes through chemo. With Varda filming, Nourry first braids her long hair and cuts off the braid, and then playing with the braid as if it is a prop while Varda films. It is an sample of the surprisingly humor and humanity that Nourry uses throughout. Serendipity seems like a strange name for a film like this but Nourry may have chosen it because her art has focused on women’s issues in the same way, disrupting expectations and using a great deal of ironic humor. Clips of some of her earlier video art projects show how Nourry likes to playfully turn things on their head to make her point. In one film, she re-imagines a sperm bank as a food truck on a city street, with confused, bemused people reading the menu and gingerly sampling the wares. In another, she uses a half-human, half-cow sculpture, and a group of young, giggling Indian girls playfully splashing milk on it to make a point about the treatment of girls in Indian society. Nourry uses her far more personal experience with the same bold way, with intelligence, humor and humanity, making Serendipity an unusual film journey worth taking with this talented feminist artist.