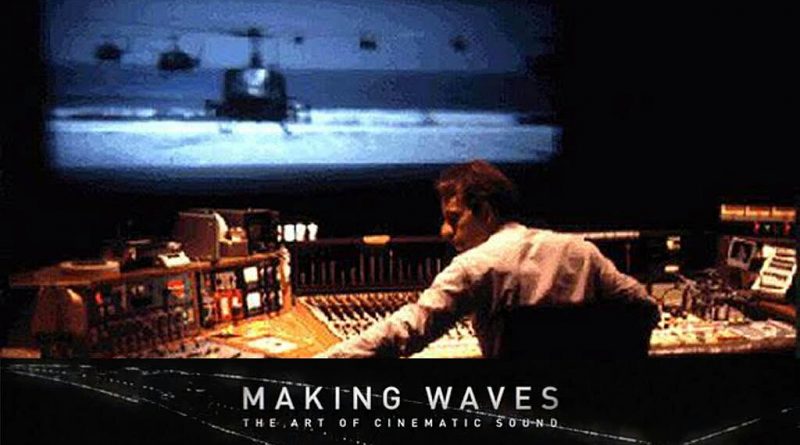 If you consider film to be a strictly visual medium, you don’t know the half of it. At least not until you see Making Waves.

Subtitled The Art of Cinematic Sound, this movie buff’s dream of a documentary develops a compelling exploration — and celebration — of sound on screen.

Deftly mixing who, what, when, how and why, Making Waves interweaves cinematic and personal histories, using clips from movie classics — and comments from the creative artists who helped make them that way — to track soundtrack development.

There’s plenty of technical talk, but mostly from folks who have not only mastered the technology but use it to express their artistry — and heighten that of their collaborators.

Eventually, we learn how and why they find their way into the world(s) of cinematic sound.

But first, they introduce us to the art and science of sound — and cinematic landmarks along the way, from the days of the silent screen to the latest digital, multi-track releases.

We meet pioneer Murray Spivak, who in 1933 gave King Kong his mighty roar. (The secret? The combined roars of lion and tiger — with the tiger’s roar reversed.)

Burtt created a mighty roar himself when he used a bear’s expressive growls to give voice to Star Wars inimitable Wookiee, Chewbacca.

Star Wars creator George Lucas joins a starry parade of directors who discuss the vital role sound plays in movies, among them Steven Spielberg, Ang Lee, David Lynch, Christopher Nolan, Robert Redford, Barbra Streisand and more. (A pity innovator Francis Ford Coppola — whose 1974 classic “The Conversation” may be the most sound-centric movie ever — turns up only in archival clips.)

Speaking of directors, Sound Waves’ Midge Costin — along with writer Bobette Buster, director of photography Sandra Chandler and editor/sound mixer Donald J. Turner — leads audiences from the general to the specific, the historic to the contemporary, with deceptive ease.

Whether breaking down “Saving Private Ryan’s” opening D-Day battle sequence or analyzing Nashville’s groundbreaking aural ambience, Making Waves will make you realize, in Spielberg’s words, “our ears lead our eyes to where the story lies.”

And what a fascinating story it proves to be.