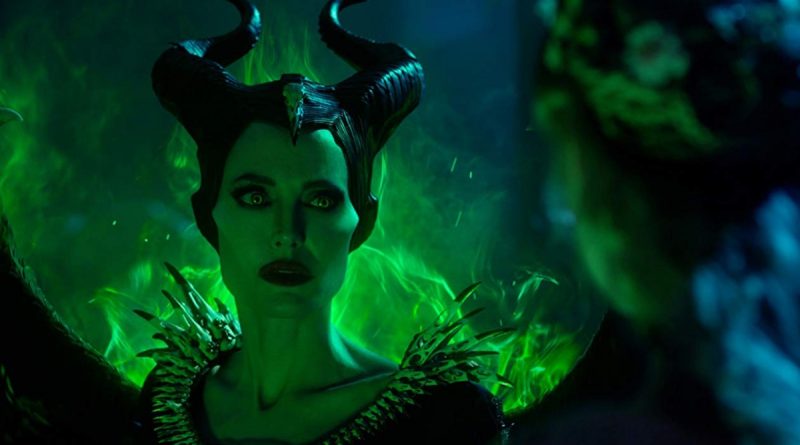 Five years after the revisionist “Maleficent” (2014), lovely Aurora (Elle Fanning) is now Queen of the Moors, surrounded by fairies, sprites and woodland creatures that adore and adorn her. It’s taken awhile, but Price Phillip (Harris Dickinson) of Ulstead has finally proposed marriage.

Still distrustful of humans, the dark sorceress Maleficient (Angelina Jolie) initially forbids her adoptive daughter’s union but, eventually, she agrees to accompany Aurora to a celebratory feast at the palace of King John (Robert Lindsay) and Queen Ingrith (Michelle Pfeiffer).

An added element is the introduction of the Dark Fey that – over the eons – have been driven into the caverns beneath the ocean. Their vulture-winged, goat-horned leaders – Conall (Chiwetel Ejiofor) and Borra (Ed Skrein) – are debating geopolitics and whether to wage war against the humankind, accompanied by misunderstood Maleficent.

As it turns out, Maleficent is not really evil, just alienated, while Aurora’s scheming, manipulative adversary hides her brutal malignance beneath glittering silvery glamour, Swarovski pearls and diamante crystal.

Scripted with far too many complications by Linda Woolverton (“Maleficient,” “Beauty and the Beast”) with Noah Harpster and Micah Fitzerman-Blue (“A Beautiful Day in the Neighborhood”), its muddled mythology is helmed by Norwegian director Joachim Ronning (“Kon-Tiki,” “Pirates of the Caribbean: Dead Men Tell No Tales”).

On the Granger Movie Gauge of 1 to 10, “Maleficient” Mistress of Evil” is a sumptuous 7. “At the end of the day, if there’s one word I want this movie to be about, it’s kindness,” declares director Ronning.