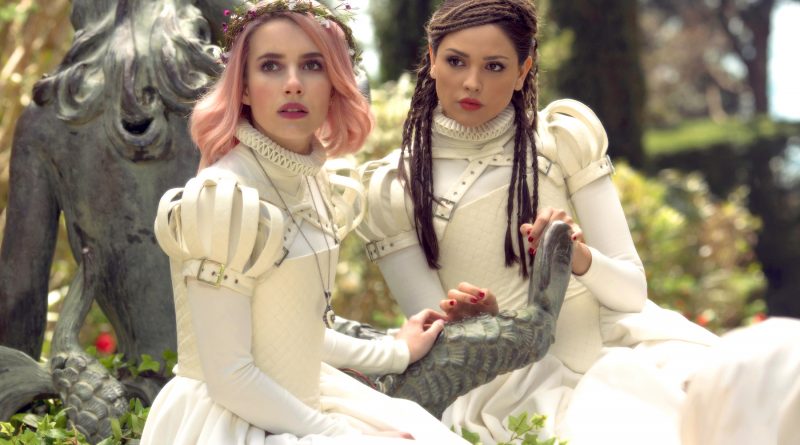 An off-kilter, steampunk blend of Disney, The Handmaids Tale and The Stepford Wives, writer/director Alice Waddington’s feature debut is entirely as intriguing as that sounds. A visually unique, narratively striking study of society’s attempts to control women, to mold them into an acceptable version of femininity, its determinedly fantastical elements are anchored by its strong themes and excellent performances.

Emma Roberts is Uma, who awakens in a beautiful island facility overseen by the strange Duchess (Milla Jovovich), where, she soon learns, she will receive therapy to help her with her “difficult” behaviour – in her case, a determination not to marry the wealthy, odious man her parents have picked for her.

Other girls are there for different reasons: Chloe (Danielle Macdonald) because her parents want her to be slim; Yu (Akwafina) to learn the refinement she needs to live with upper-class relatives in China; and pop star Armana (Eiza Gonzalez) to overcome her unconventional creative and sexual impulses. The emerging bonds of friendship between the four offer some salvation, and they are brilliant together on-screen.

While the tone may be defiantly kitsch, however, with the costumes and production design evoking the most lavish romantic fantasy, Paradise Hills makes some ugly, damning points. The idea that women need to have their individuality psychologically (and, often,
physically) beaten out of them is truly awful; that they often have no idea it’s happening is more disturbing still.

Waddington also expertly employs some impactful visuals — the women are often shackled by corsets, wear supposedly demure face masks and are always overseen by an army of apparently-placid men — to drive her feminist message further home.

EDITOR’S NOTE: Paradise Hills is AWFJ’s Movie of the Week for November 1, 2019.