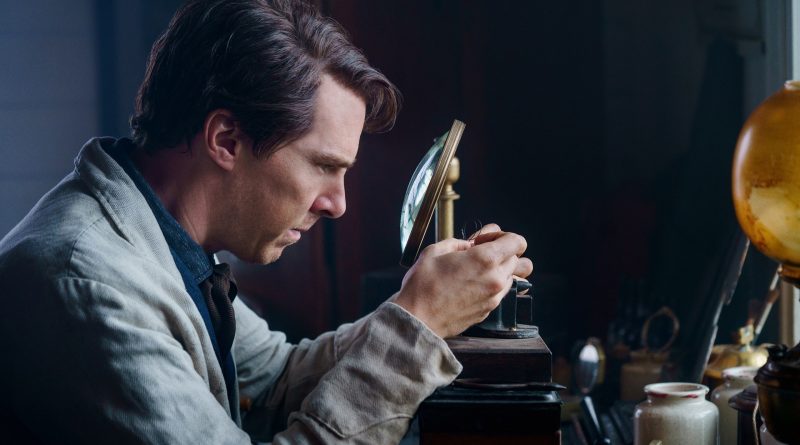 Back in 1880, when electricity was new, alternating current competed with direct current. Thomas Edison and George Westinghouse, with side notes from Nicola Tesla, duked it out in their labs. It’s hard to imagine such a time, but director Alfonso Gomez-Rejon, who also directed the winsome Me and Earl and the Dying Girl, brings the current history to light.

Edison believes that with his direct current he is going to light up all of Manhattan. His hand is poised to pat himself on the back when Westinghouse and his partner Tesla interrupt the “self-atta-boys.” Edison is an inventor of boundless energy and negotiation. Westinghouse honed his business acumen at his family’s famous air brake company. His approach is more satin-y, less grainy. Tesla is an immigrant genius who breaks off from Westinghouse and leaves the field to the two swaggering gents.

At first, Edison declares that he will never work on any project that could end someone’s life, but then he considers the worth of his DC over Westinghouse’s AC in preparing an electric chair as a kinder, gentler way of murder. But not without Edison’s devious endeavors to blame Westinghouse.

How much of Gomez-Rejon’s triple bio-pic is true is hard to sum up. Suffice it to say that the film may simply alert the movie-goer to the mere fact of the competition and not so much the mere facts of the lives of this troika. Benedict Cumberbatch, although not so short or homely as Edison, has the right electricity for the role. Michael Shannon smooths Westinghouse’s wrinkles, and Nicholas Hoult portrays Tesla as a bewildered outlier. Tom Holland supports them in the role of Edison’s loyal secretary.

The truly winning aspect of this film is Chung Hoon-Chung’s cinematography. Close-ups on the Westinghouse air brakes, on J.P. Morgan’s red nose — those are expected. But overhead shots at the New York Stock Exchange, down columns, and over a crowd, these are inventive. Shots of Westinghouse’s factory and canted angles of the principals — these manifest the story of invention though the camera’s lens and make “The Current War” worth watching beyond the biographies.