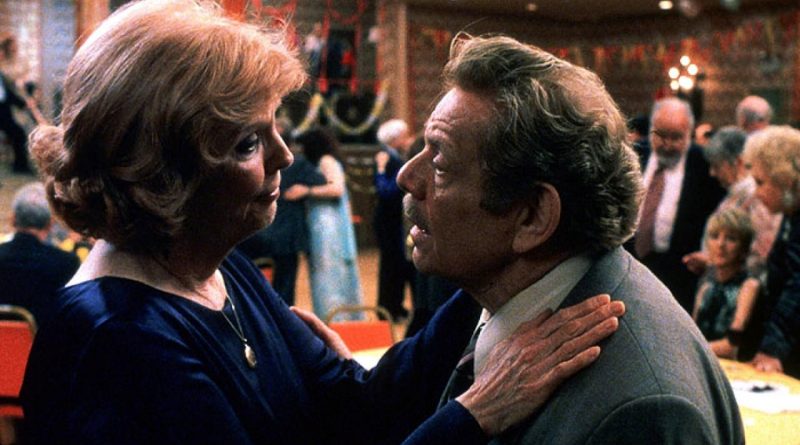 “A little gift from me to me.”

That’s how A Fish in the Bathtub’s Sam Kaplan describes the title creature.

It also serves as an apt characterization of the movie itself, a long-delayed gift from gifted filmmaker Joan Micklin Silver.

A Fish in the Bathtub debuted before the turn of the millennium. The 20th-anniversary restoration deftly illustrates Silver’s timeless talents — and time’s inevitable toll.

Around the time of A Fish in the Bathtub’s initial release, Jerry Stiller — who stars as the aforementioned Sam Kaplan — was wrapping up his run as Seinfeld’s dyspeptic Frank Costanza.

But the movie hearkens back to Stiller’s stand-up days as half of a long-running comedy duo with wife Anne Meara.

A Fish in the Bathtub’s family connections extend off-screen; the director’s husband and frequent producer, Raphael D. Silver, is credited with the screenplay alongside Jonathan Silverman and David Chudnowsky.

Raphael Silver died in 2013, Anne Meara in 2015. But, thanks to the magic of the movies, they’re both very much alive — and undeniably lively.

Stiller and Meara play (what else?) long-married Sam and Molly Kaplan, whose default setting can be summarized in three little words: kvetch, kvetch, kvetch.

As in many of Silver’s most successful movies — especially her 1975 breakthrough Hester Street and the 1988 charmer Crossing Delancey — the director delineates not only relationships but entire worlds.

The movie’s vividly lived-in neighborhoods (Brooklyn and Queens — where else?) may have changed, but Silver ably reveals the ways those connections shape the characters’ past and present selves.

Not surprisingly, Stiller and Meara bring expert comedic timing and rueful, heartfelt emotion to their roles. But the movie’s all-aces supporting cast augments the comedy considerably. (A particular favorite: Bob Dishy as an almanac-addicted potential suitor of Molly’s.)

Sadly, several familiar faces — including Doris Roberts, Paul Benedict, Phyllis Newman and Louis Zorich — are no longer with us to celebrate A Fish in the Bathtub’s return.

But that’s no reason for you to miss the welcome-back party for this gentle gem.