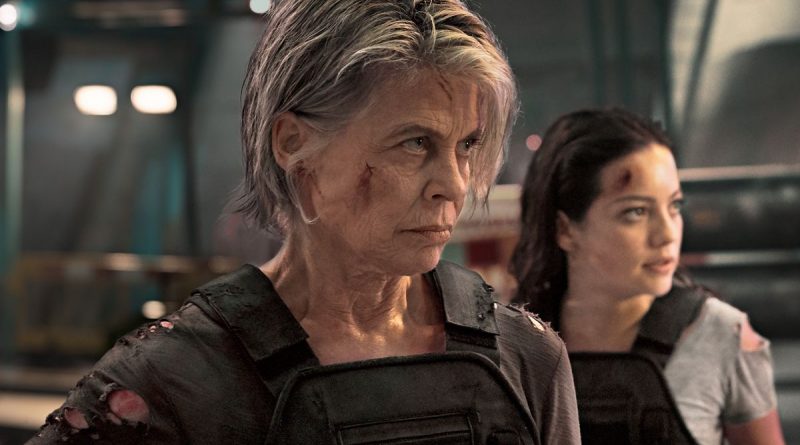 The sixth film in the franchise is a direct sequel to T2: Judgment Day (1991), returning Linda Hamilton as Sarah Connor, the role she originated almost 30 years ago, and reuniting her with Arnold Schwarzenegger as the T-800 cyborg.

To recap: Sarah Connor trained her son John to become a warrior to prevent a sentient computer called Skynet from igniting a nuclear holocaust, referred to as Judgment Day; in that endeavor, young John was killed by the T-800. (Forget the other three intervening sequels.)

Dani is the target of another time traveler, a menacing Rev-9 Terminator (Gabriel Luna), whose liquid-metal body is capable of shape-shifting. Dani works on an auto factory assembly line in Mexico City, and this mean machine shows no hesitation killing her brother, father and co-workers while relentlessly tracking her down.

Just as they’re cornered, Dani and Grace are saved by badass waitress-turned-warrior Sarah Connor (Linda Hamilton), who was alerted to their predicament via a mysterious text message and growls: “Come with me if you want to live.”

As for Arnold, he’s now living a quiet life as “Carl,” selling draperies in the backwoods of Texas and enjoying an adoptive family. Although Sarah, understandably, loathes him, his core programming has been changed to save the humans he once hunted.

Scripted by David Goyer, Justin Rhodes and Billy Ray, it’s directed by Tim Miller (Deadpool) and executive produced by James Cameron, who originated the franchise. While there are a multitude of high-octane chase sequences, filled with fast editing and complicated CGI, it’s too bad there’s not more humor.

FULL DISCLOSURE: My son, Don Granger, is one of the executive producers.

On the Granger Movie Gauge of 1 to 10, Terminator: Dark Fate is an action-packed 7, a sci-fi spectacle.