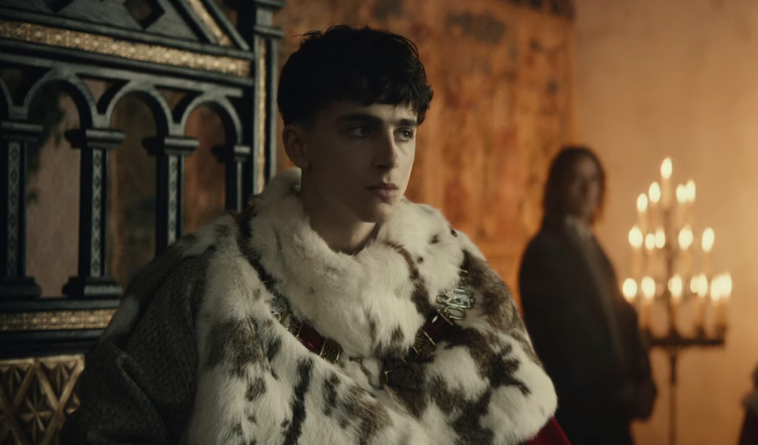 Netflix ventures into historical drama with David Michod and Joel Edgerton’s loose amalgam of Shakespeare’s Henry IV and Henry V, although the name of the Bard isn’t included in the credits.

Set in the early 15th century, Timothee Chalamet stars as pallid Prince Hal, the hedonistic first-born son of Henry IV (Ben Mendelsohn), who returns home as his father is dying only to discover that he’s considered such a “whoring fool” that his ambitious younger brother Thomas (Dean-Charles Chapman) will inherit the throne.

As fate would have it, Thomas subsequently dies in Wales, leaving Hal – reluctantly crowned Henry V – to decide whether to continue fighting the French in unnecessary wars: “A new chapter of my life has begun…As Prince, I spent my days drinking, clowning. Now, I find myself King.”

At Hal’s side is his battle-hardened buddy, Sir John Falstaff. (Joel Edgerton), who soon becomes the Warrior King’s most trusted confidante.

Although the 5,000-9,000 British were outnumbered by 12,000-30,000 French, Henry V’s army possessed a new weapon: the longbow. When the French cavalry attacked the English archers, they encountered a sea of sharpened wooden stakes and were cut down by arrows.

After that victory, Henry V captured Caen, Normandy and Rouen until Charles VI surrendered. On May 21, 1420, they signed the Treaty of Troyes, disinheriting the Dauphin, naming Henry as France’s Regent and bestowing Charles’ daughter as Henry’s bride.

King Henry V’s nine-year reign ended with his death from dysentery in 1422.

Stripped of Shakespeare’s poetic iambic pentameter and medieval perspective, it’s a ponderously paced coming-of-age saga with little effort devoted to character development. Indeed, the screen only seems to spark upon the arrival of the combative French Princess Catherine (Lily-Rose Depp).

Available for streaming, on the Granger Movie Gauge of 1 to 10, The King is a gloomy, generic 5 – about waging endless war.