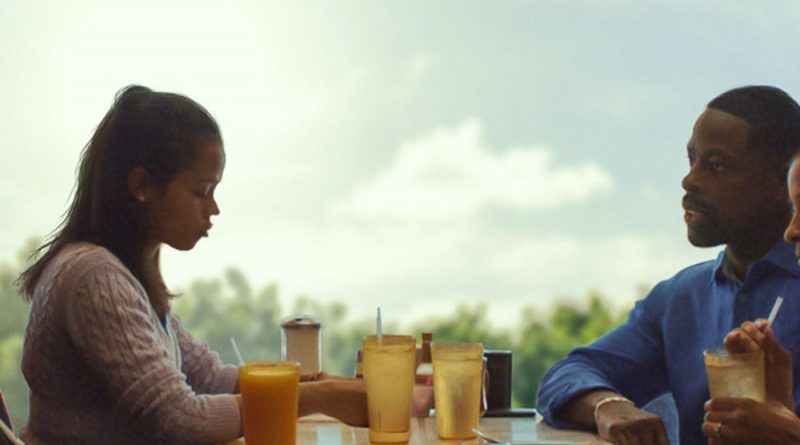 Waves is the story of a tragedy that tears a family apart, and it is the story of what happens then, told in an impressionistic, almost pointillist style by writer/director Trey Edward Shults. In an interview, Shults and stars Taylor Russell and Kelvin Harrison, Jr., who play teenaged siblings, Emily and Tyler, talk about the making and meaning of the film.

Nell Minow: This movie has great respect for the audience. So, Trey, how much did you tell your actors to fill in the spaces the movie does not spell out? Trey Sults: I think it’s different for every actor. Everyone came on at different times. Kel got a script eight months before we started shooting so we were talking for a very long time. There was a huge collaboration between us in building Tyler and the nuances of his family. Honestly, I feel like it’s a story I know very well and it feels like myself and loved ones that lived it. The movie is like like the sub-text and everything not there that’s really there if that makes sense. It’s some of the most fascinating things, so I just love talking about it and digging in. We don’t do traditional rehearsals but we’ll talk about a scene. I remember Lucas Hedges would come to me with a scene and say, “We have other ideas — could it go this way?” Playing within the framework was so exciting and fun. It was a pleasure.

Minow: What kind questions did you ask and what kind of guidance did he give you that was especially helpful? Kelvin Harrisom: I ask a lot of questions — I just wanted to know: what was the timeline, what happened before the movie started, why am I dying my hair blonde, what’s the relationship with the biological mother, when did Catharine [the stepmother played by Renée Elise Goldsberry] come into the picture, what type of upbringing did my dad have, what were my grandparents like? All the history tells us who we are in this moment now and where we’re going. How much money does our family make a year? It’s literally every single detail to the point where Trey said, “I got to go man, I got to get off the phone because I have other questions to answer.” [Laughs]

Minow: The entire cast is exceptional. You have some of my favorites in the film including Clifton Collins, Jr. and Renée Elise Goldsberry.

Sults: I love Clifton, he’s amazing. He’s an incredible actor and I wish he was in the movie more than he is. He has to capitalize those moments when he is and of course he does. For Renée, I’m a giant Hamilton fan and I saw her with the original cast when she was in it and I just been a big fan of hers ever since. That being said, even that I still wasn’t prepared for how good she would be. She genuinely blew me away. Watching my little hand-held monitor as they’re shooting, I’m wiping away tears from take one. Numerous times she just blew me away. All the actors did, though. I felt so, so blessed. I want to give a shout out to another actor, too, Neal Huff, who is at the end of the movie playing a man dying with cancer and he’s unbelievable. Incredible character who deserves all the praise in the world and he blew me away.

Harrison: I didn’t know I’d worked with him before. He was in Monsters and Men. But you would never know he’s the same guy.

Sults: One of the most blown away I’ve ever been by a performer in anything I’ve ever seen. And it was so triggering for me because we were creating real life stuff that happened with my dad. I broke down watching him. I couldn’t take it anymore because he was my dad again.

Minow: Taylor, you witnessed that as your character on screen. How did that experience change help Emily open up to her own family in a way that she hadn’t been able to before? Taylor Russell: I think it was really important for her, I think she saw she had a lot of shame and guilt and regret about what happened with her and her brother at the party. She had not a gut feeling that he would do something wrong but an intuition that there was just something didn’t feel right. I’ve had that so much in my life where you know something’s not right and then you don’t listen to yourself or you say no.no, no, it’s not that thing. She doesn’t want this person who she’s falling in love with to regret things in life the way that she does. Being there and seeing that it’s an equally healing experience, it’s not completely selfless. And it changes her that he’s really seen her and made her feel like she was validated in her feelings. It’s like a mutual gift that they gave to each other so it just seems it was a two-way street.

Minow: Kelvin, tell me a little bit about showing us how all the different pressures build up on Tyler.

Harrison: Someone said to me earlier, “I forgot about the pressures of school and just literally being 18.” What does that feel like? Love feels interesting for the first time if it’s even love, even if it’s just infatuation. And then there’s doing homework and grades and applying to colleges hoping you get in and leaving home and what is my life going to be? I remember when I was applying to school and I was just like, “Okay, if I get into this school what does this mean, how long am I going to go there, what does my job look like afterwards? Will I get a job?” because there are so many millennials that do not work. This new fear of, “Will I have the life that I grew up in?” and your parents are constantly pushing you because they understand that as well and then wrestling becomes this big obsession. We talked a lot about that because when you’re a young person that one thing that you’re good at becomes your whole life. For me in my early life it was my music; my dad was a musician and my mom was a musician and I started playing piano and trumpet. My dad was just so obsessed with the idea of me using the tools and the experience that he had cultivated for himself to give back to me and if I didn’t do that then what was I going to do? What did I mean to the family? So, I’m defined by how my dad sees me, my self-worth is defined by how the teacher sees me, how the world sees me. Tyler is just thinking about all the stuff — he’s like, “I don’t know what to do with all of it,” and once taken away, that one thing that made sense is taken away from me; who am I? “No one, I’m no one and I’m trying to make this thing make sense with this girl and create this life because that’s the only thing that feels real; that’s the only thing that feels like I have control over,” and in the end at that point he loses that. It’s sad. Life happens so fast and social media is so rapid.

Minow: What do you want people to talk about after they see the film?

Sults: I do think the movie is about a lot and different people take different things from it. If I have to pick one thing, I think it’s this: try and understand other people, having empathy for each other and communicating; that’s the big thing. Trying to just break down those barriers and talk to each other because it’s hard to see and understand what someone else is going through, especially your closest ones or your loved ones. Love, forgiveness, hope, empathy, humanity, all that good stuff. The movie gets very dark and overwhelming at times but I do believe there’s hope. Life gets very hard but we try to get to the other side and grow from it.

Minow: I think it ends on a hopeful note.

Sults: I hope so.