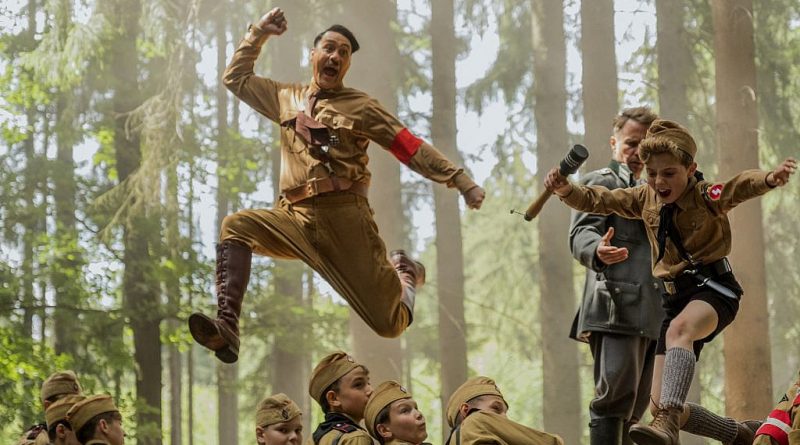 With his hilarious and heart-shattering World War II satire “Jojo Rabbit,” audacious writer, director and actor Taika Waititi triumphantly balances comedy and tragedy, history and fantasy, on a metaphorical knife-edge as sharp and thin as the Nazi-issued dagger his young protagonist carries.

Set in Germany during the waning days of WWII, the New Zealand filmmaker’s adaptation of Christine Leunen’s novel “Caging Skies” follows 10-year-old Jojo (wonderful newcomer Roman Griffin Davis), a new Hitler Youth recruit who so fancies himself a Nazi zealot that his imaginary friend is a clownish version of Adolf Hitler (Waititi, brilliantly eccentric). Truthfully, though, it’s hard to imagine a boy less suited for violent fanaticism than tenderhearted Jojo, who draws the mockery of the teen counselors at war camp by refusing to kill a rabbit and then has his efforts to prove himself a capable fighter go terribly wrong.

Recovering at home, where his father is off to war, Jojo starts to suspect that his protective and free-spirited mother Rosie (Scarlett Johansson, in top form) isn’t quite the good German she pretends to be. Before long, he discovers she has been keeping a secret: a Jewish teenager named Elsa (Thomasin McKenzie, just as fantastic as she was in last year’s sadly overlooked “Leave No Trace”) concealed in a hidden space in the walls of their house.

When he realizes that he can’t turn in Elsa without endangering his mother, Jojo – who with the innocence and callousness of a child has absorbed every hateful thing he’s heard about Jews, including ridiculous notions about them reading minds and sleeping upside down – decides to interrogate the girl and learn all he can about the enemy to aid the Nazi cause. But Elsa, bitter over the loss of home, family and freedom, has little patience for Jojo’s vile nonsense, no matter how guilelessly regurgitated.

As the war winds down to Germany’s inevitable defeat, their secret relationship evolves slowly – and if you think your adolescence was weird, try to imagine coming of age surrounded by Oscar winner Sam Rockwell as the outlandishly inept Hitler Youth leader Captain Klenzendorf, Rebel Wilson and Alfie Allen as his off-kilter underlings, Stephen Merchant as the deceptively mild-mannered Gestapo officer Herr Deertz and scene-stealer Archie Yates as Jojo’s equally sweet and befuddled Hitler Youth pal Yorki.

One of the best films of the year, “Jojo Rabbit” nimbly zips through the full gamut of emotions: It’s by turns uproarious, warm, heart-rending, horrifying, silly, surreal, scary and joyous. Those feelings often shift suddenly, as with the droll opening in which a German version of “I Want to Hold Your Hand” is played over footage of Aryan teens cheering Hitler with Beatlemania-style fervor, a spectacle that soon induces stomach-sinking dread.

Against considerable odds, Waititi, who is of Maori, Irish and Russian Jewish heritage, has created a hilarious satire that in between scenes of a mustachioed cartoon-Hilter version of himself consuming a unicorn head and a heavily mascaraed Rockwell charging into battle manages to pointedly remind us to think hard before embracing the absurdity of hate.