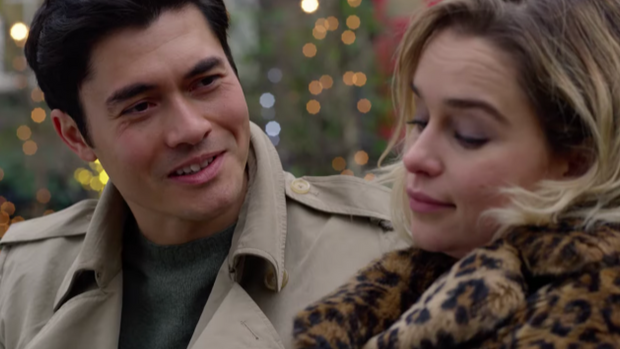 Last Christmas, from director Paul Feig (Bridesmaids, Ghostbusters) is the first major holiday movie of the season and what a surprise. It’s funny, charming and sweeter than a dozen sugar cookies.

In Last Christmas Clarke plays Kate, a 26-year-old Yugoslavian now living in London. She’s had a rough start in life. Kate is fortunate to even be alive after surviving a major medical scare. That should be reason enough to be thankful, but nope. Kate is unhappy with how her life has turned out. She wants to be a singer and actor but keeps messing up during auditions.

Kate’s dysfunctional family isn’t supportive of her much either. Her dad Ivan (Boris Isakovic, Working Class Heroes) is a bitter, old cab driver. Her mother (Emma Thompson who co-wrote the movie) rarely has anything nice to say about anyone and Kate and her sister Marta (Lydia Leonard, TV’s Gentleman Jack) haven’t spoken in like forever.

So, now Kate spends much of her time working as an elf in a year-round Christmas store that’s owned by her boss whose aptly named Santa (a scene-stealing Michelle Yeoh, Crazy Rich Asians).

A string of bad luck has forced Kate from her apartment and she’s roaming the streets of London and relying on the generosity of old friends to let her crash at their place. However, she manages to wear out her welcome with them rather quickly. Even her boss is losing patience with her.

But just when Kate believes nothing will get better, she meets a handsome, hunky guy named Tom (Henry Golding, Crazy Rich Asians) who takes notice of her in a big way.

Tom seems almost too good to be true, but Kate senses there’s something special about this guy. What could he possibly want with her?

Like the old saying goes, people come into your life for a reason, season or lifetime. Well, Tom and Kate’s love connection is heart-warming and heartbreaking too.

Last Christmas is schmaltzy for sure, but the cast elevates this rom com beyond predictable pap and the killer soundtrack which features songs from the late, great George Michael is a huge bonus.

(Three Out Of Four Stars).